Breakout WorldSBK victory for Razgatlioglu on Saturday in France

WorldSSP pole position a career-first for Smith at Magny-Cours.

Despite a disappointing Tissot Superpole session, Toprak Razgatlioglu (Turkish Puccetti Racing) made WorldSBK history at the Pirelli French Round by becoming the first Turkish winner in the championship’s history.

Many-Cours produced one of the races of the WorldSBK season so far as five different riders lead at various stages, before Michael van der Mark (Pata Yamaha WorldSBK Team) crashed out of the lead three laps from home.

As the race got underway, Rea came under immediate pressure from Van der Mark with two almost colliding into the Adelaide hairpin on lap one. Their duel allowed Tom Sykes (BMW Motorrad WorldSBK Team) to storm through from sixth on the grid to second by the end of lap one.

Sykes’ progress continued on lap two as he used the corner speed of the BMW to overtake Rea at Estoril, although the leading group was growing and growing with Chaz Davies (Aruba.it Racing – Ducati) joining the action from 11th on the grid, while a remarkable early charge brought Razgatlioglu into play.

On lap three, Davies became the third different leader in as many laps but the Welshman’s challenge came to a dramatic end moments later with a crash into turn 15. Davies’ lost the front-end of his machine with second-placed Razgatlioglu fortunate to stay upright despite slight contact from the errant Ducati.

The chaos allowed Sykes a moment of breathing space but the BMW rider was quickly reeled in, losing the lead to Van der Mark on lap six. With the battle continuing to rage in the leading group, van der Mark was able to open up a slight advantage while Rea came under intense pressure.

Razgatlioglu was able to edge ahead, setting the fastest lap in the process, but Rea ultimately regained P2 from the Turkish rider shortly after half-distance, allowing him to give chase after Van der Mark, who was 1.2 seconds ahead.

Behind the leading trio, Loris Baz (Ten Kate Racing – Yamaha) had established himself in an excellent fourth with Sykes settling in fifth after an all-action start. Alex Lowes (Pata Yamaha WorldSBK Team) was holding sixth but the Briton was coming under increasing pressure from Alvaro Bautista (Aruba.it Racing – Ducati).

Leon Haslam (Kawasaki Racing Team WorldSBK) was also in the thick of the action but a highside at the final chicane eliminated him five laps from home. With clear track in front, Rea began his relentless chase of Van der Mark, wiping out his advantage heading into the closing stages.

With three laps remaining, the leading pair were together but Van der Mark’s hopes of a second victory of 2019 were extinguished when the front end of his Yamaha folded into the Adelaide hairpin, the pressure proving too much.

Rea seemed on course for a 12th victory of the season, beginning the final lap one second clear of Razgatlioglu but a stunning final lap from the Turkish rider brought him right into the tail of the Ulsterman entering the last sector.

Under braking for turn 15, Toprak dived up the inside with Rea keen to avoid a costly collision, opting to settle for second. The fight for the final podium spot also went down to the wire with Sykes rallying in the latter stages to overhaul Baz, securing BMW’s fourth podium of the season. Baz held on to fourth while Bautista recovered to fifth.

After showing a preview of his potential on Friday afternoon, Kyle Smith (Team Pedercini Racing) proved to be in a class of his own in the wet, claiming his first-ever pole position in WorldSSP.

The championship battle looks set to play out from the second row after a fascinating Tissot Superpole session at Magny-Cours. Smith leads the front row ahead of Jules Cluzel (GMT94 Yamaha) and Ayrton Badovini (Team Pedercini Racing).

The championship challengers went head-to-head in the dying seconds with Federico Caricasulo (Bardahl Evan Bros. WorldSSP Team) securing a narrow advantage over his teammate Randy Krummenacher, despite missing out on the front row for the first time this season. Caricasulo will line up fourth, with Krummenacher sixth. 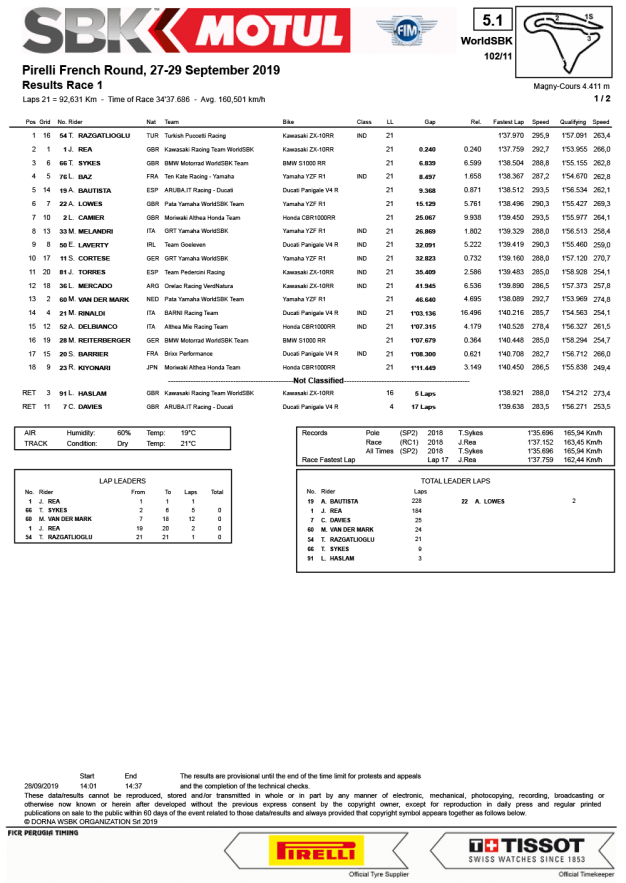 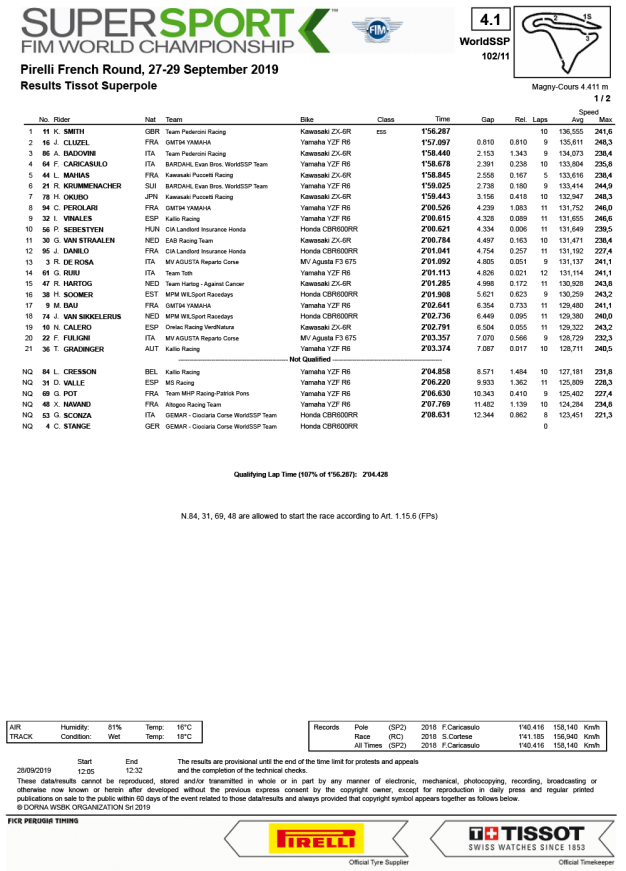 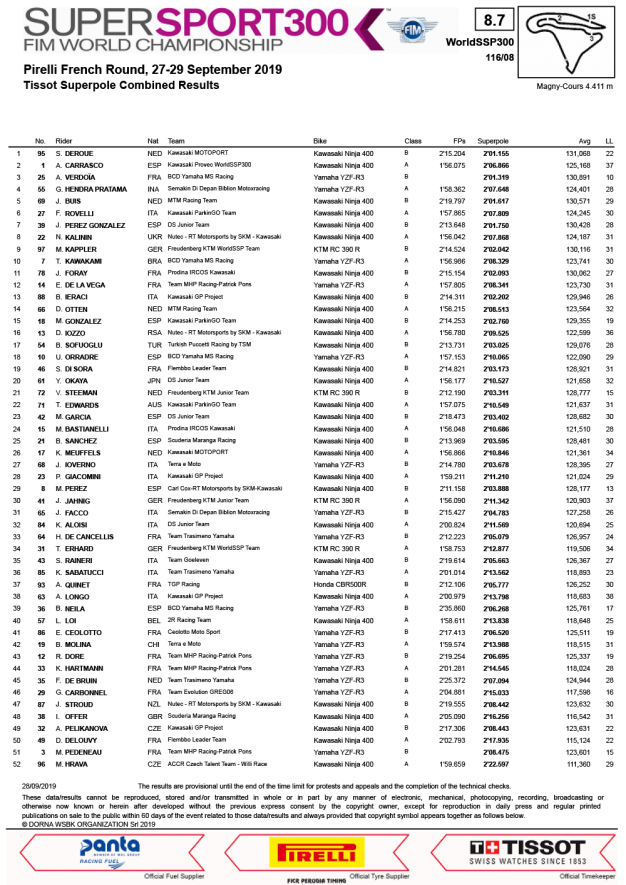