Spaniard taken out of Magny-Cours race two as Rea goes on to take championship. 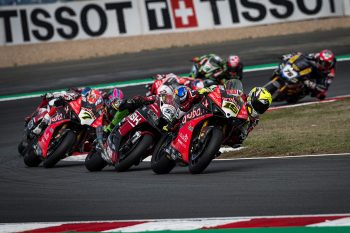 Aruba.it Racing Ducati’s Alvaro Bautista has acknowledged that a second race incident with Toprak Razgatlioglu in France wasn’t what cost him the 2019 Superbike World Championship.

The Spaniard finished fifth in race one at Magny-Cours – a circuit new to the 34-year-old – but was involved in an early crash with Saturday victor Razgatlioglu in race two.

Those developments enabled now five-time WorldSBK champion Jonathan Rea to go on and clinch this year’s crown for Kawasaki with two rounds to spare, despite Bautista’s miraculous start to the season of 11-straight wins. He has 15 wins in total during his rookie season.

“Fortunately, physically I’m okay after the crash, I’m just a bit disappointed because I think in race two I was able to fight for the win,” Bautista reflected. “For sure, the weekend was tough, it was a new track that I’d never seen before and there was very little time to ride in dry conditions.

“Yesterday in the first race I managed to improve the feeling with the track and made up a lot of positions, while today in race two I made a good start and felt really good with the bike up at the front. Unfortunately, I was involved in Razgatlioglu’s crash at turn 13 and his mistake caused my retirement.

“It’s a pity to finish in this way, but it’s all part of racing. Congratulations to Jonathan Rea because he had a great season. During the championship Jonathan has always been able to get the best out of every situation and, for sure, we didn’t lose the title because of this race.”

Next year will see Bautista depart Ducati following a single season in WorldSBK together, recently confirmed to be joining Honda Racing Corporation in the Japanese company’s full factory return to the series.