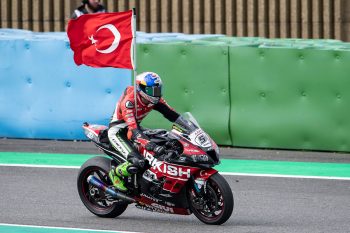 The 22-year-old won his first WorldSBK race last weekend at Magny-Cours, however, he will switch from Kawasaki Puccetti Racing to the factory Yamaha squad in place of Alex Lowes next year.

“Toprak Razgatlioglu is the most exciting young rider in WorldSBK and I’m both happy and proud that he will race for Yamaha in 2020,” stated Eric de Seynes, president of Yamaha Motor Europe. “When you consider Toprak’s progression this year, only his second in WorldSBK, his prodigious talent is obvious, but so is his warrior spirit.

“Like his teammate for next season, Michael van der Mark, he’s a rider who always finds that little bit extra on race day and is prepared to push to the limit to overcome any obstacle – we saw that clearly in Magny-Cours, where he came from the sixth row of the grid to claim his first WorldSBK race win.

“We have also seen this season that Yamaha has closed the gap to our rivals on track and I’m excited to see what Toprak can do on our Yamaha YZF-R1 in 2020. With Michael and Toprak, I think we will have one of the strongest and most dynamic rider line-ups on the WorldSBK grid next year.”

Last year saw Razgatlioglu secure two podium finishes in his debut season with second place at Donington Park and third place in the penultimate round in Argentina. He has developed even more strongly in 2019, securing his first top-three finish of the season at the Italian WorldSBK round in Imola and finishing on the podium at every round since.

Razgatlioglu secured his maiden WorldSBK win with a scintillating performance in race one at Magny-Cours, which he started from 16th position on the grid. The young Turk backed that up with victory in the Superpole sprint race the following day, before crashing out of race two.