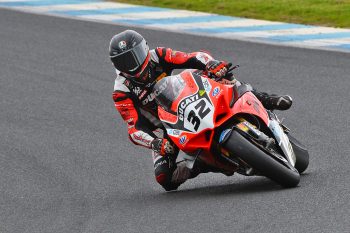 The DesmoSport Ducati co-owner was scheduled to contest the full season in 2019 until injuries sustained at the opening round prompted the team to draft in current points-leader Mike Jones.

Bayliss, 50, recently lined up in a Victorian state title round at Phillip Island with a strong performance alongside Jones – who continues to pilot the 1299 Panigale FE – and will be a starter in the Australian Motorcycle Grand Prix support races later this month.

“It was nice to do a few laps on the V4 because I wanted to get a bit more time on it before the GP,” Bayliss told CycleOnline. “I’m still not going as well as I’d like to be on that, but honestly, we’re really focused on what we need to do with Mike to finish the job off this year – we have to concentrate on him.

“It’ll be nice to put the bike on track with a lot of people down here, in front of our sponsors and fans during the GP weekend. It’s going to be a really good event for us because we’ve got a hospitality down here as well, so it’ll be nice.”

At the conclusion of Friday’s ASBK sessions Bayliss was ninth quickest on combined times, his 1m34.116s coming in the morning’s first practice session. He wasn’t the lone V4 on track this weekend, with multiple ASBK champion Jamie Stauffer joining Craig McMartin Racing for the round.