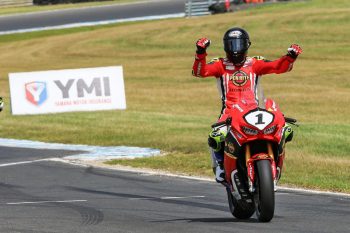 The 2019 Motul Pirelli Australian Superbike Championship (ASBK) was thrown into chaos during race two of Phillip Island’s penultimate round, as the encounter saw three title contenders crash out as Troy Herfoss broke through to claim the race and overall win, while also inheriting the points lead.

It was once again Mike Jones (DesmoSport Ducati) and race one winner Wayne Maxwell (Team Suzuki Ecstar) who the hit front, as the chaos commenced early with title challenger Cru Halliday (Yamaha Racing Team) crashing out on lap two.

The battle between Jones and Maxwell ensued over the opening half of the race, the duo trading positions on numerous occasions and making a number of close calls before Herfoss joined the party.

The championship erupted on lap seven when Maxwell snuck underneath Jones, bumping him in the process before the Ducati pilot hit the ground and was ruled out the race – ultimately relinquishing the points lead. The incident went under investigation by Race Direction, however no further action was deemed post-race.

While the mayhem continued, Maxwell and Herfoss maintained their battle for the lead, the victory coming down to the final turns as the reigning champion edged his rival by just 0.028s for the top spot.

Glenn Allerton (Maxima BMW) was sixth followed by Damon Rees, as Alex Phillis (Team Suzuki Ecstar), Lachlan Epis (Kawasaki) and Sloan Frost (Suzuki) made up positions eight, nine and 10. Overall, it was Herfoss who captured the win ahead of Maxwell and Waters. Herfoss leads Maxwell by three points in the championship standings.

The ASBK now heads to Sydney Motorsport Park on 1-3 November for the seventh and final round of the series. 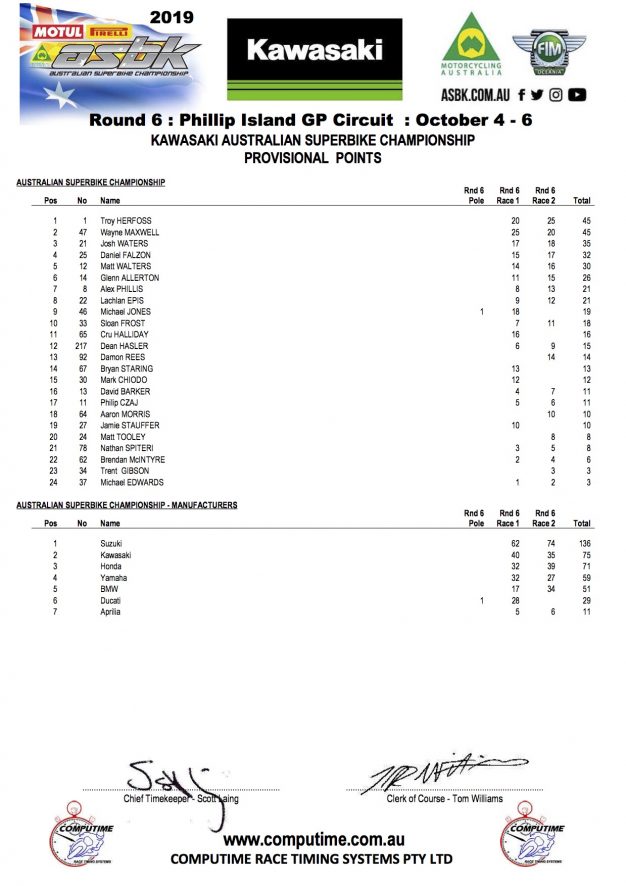