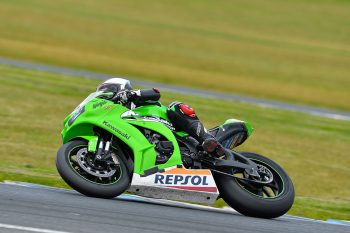 Kawasaki independent Matt Walters stole the show in Motul Pirelli Australian Superbike Championship (ASBK) qualifying on Saturday at Phillip Island after slotting his Ninja ZX-10RR onto the front row of the grid.

Walters, 26, will start third in both of today’s Kawasaki Superbike races in Victoria after posting a PB lap of 1m32.545s in Q2 on Saturday afternoon.

“It was a really good lap and I had a lot of fun doing it,” Walters told CycleOnline.com.au. “It’s the best lap I’ve ever done here, so it’s really confidence inspiring – we’ll keep chipping away and trying to move forward.

“We’ve had two or three really hard years, not with the bike, but just things that haven’t gone our way. We’re turning it around though, so to be on the front row is great for a small, family-run outfit.”

With a pair of 12-lap races on the agenda for Sunday, Walters knows that the real challenge is ahead as he starts alongside pole-setter Mike Jones (DesmoSport Ducati) and Wayne Maxwell (Team Suzuki Ecstar).

“One lap’s alright, but I’ve gotta do it for two races on Sunday…” he added. “That’s when it counts, so I’m really looking forward to getting the elbows out and getting involved.”