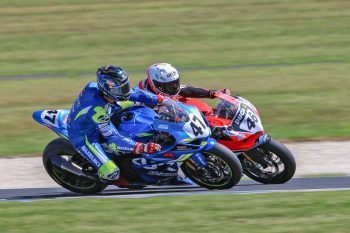 Mike Jones (DesmoSport Ducati) and Wayne Maxwell (Team Suzuki Ecstar) have reacted to their race two clash at Phillip Island’s penultimate round of the 2019 Motul Pirelli Australian Superbike Championship (ASBK), with Jones declaring the incident a ‘dog move’, while Maxwell suggests it was a racing incident.

After a fierce battle in the opening half of the second encounter, former points leader Jones made a slight error on lap seven which Maxwell looked to capitalise on, however the Suzuki pilot made contact with Jones on the exit of the turn that ultimately forced the Ducati rider to crash out of the race.

The incident immediately underwent investigation by Race Direction, however no further action was deemed post-race, meaning the provisional results would in fact be official, with Maxwell retaining second.

Jones, who was demoted to third in the standings after previously holding the points after rounds four and five, believes there was intent behind the manoeuvre that has come at a significant cost to his title campaign.

“Look, it was obviously a bit of a dog move really by Maxwell,” Jones told CycleOnline.com.au. “I was wide, and I felt like I left enough space for him to take the line on the inside and have the position, but at the end of the day, he wanted to run it out to the edge of the track and take me with him.

“It was the type of move the certainly didn’t need to be done – there have been plenty of times where people have run wide and the guy coming up the inside keeps their line and goes into the lead.

“I think it was definitely a hard move and it definitely had some intent to do some damage – at the end of the day, it did. It’s a shame for me, a shame for the championship because were going really well and it was looking like a really strong race.”

Race one winner Maxwell maintains his innocence on the matter, although he admits the thought of a post-race penalty crept into mind during his thrilling battle with eventual race two and overall winner Troy Herfoss (Penrite Honda Racing).

“He went in to cover his line, couldn’t stop and went deep, I got sucked in there a bit and picked up the throttle to drive and block the line – he tried to hang on around the outside and I think he clipped my foot and he went down,” Maxwell explained to CycleOnline.com.au.

“I’ve been on the end of that twice this year, and that’s not what I want to see and it’s not what I’m about. I’ll go see Mike and see if he’s alright. As for the race, it was a tough race. It’s a race we probably should’ve won.

“I was thinking about Mike [on the last lap], because I was thinking am I going to get a penalty? How is it going to be read and how is everyone going to react to it? It is what it is and we still got a strong result.”