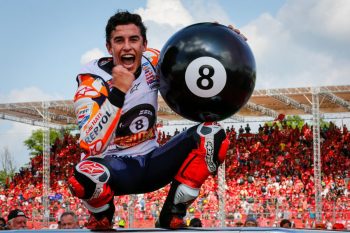 In yet another head-to-head scrap, Marc Marquez (Repsol Honda Team) took on Fabio Quartararo (Petronas Yamaha SRT) in a thrilling climax, leaving it to the last lap to take victory in a final corner showdown that saw him lift his sixth premier MotoGP crown and his eighth world championship.

With tension mounting, it was lights-out and a fantastic start from Fabio Quartararo, as the 20-year-old Frenchman blasted into the lead at turn one, with Marc Marquez almost colliding with Franco Morbidelli (Petronas Yamaha SRT) on the short shoot to the first turn.

Maverick Vinales made a good start and held on to third whilst Andrea Dovizioso (Ducati Team) also got away well, pushing through into fourth. Valentino Rossi (Monster Energy Yamaha MotoGP) didn’t make big gains but was seventh by the end of lap one, moving through from ninth on the grid. It was a catastrophe for Jack Miller (Pramac Racing), who stalled his bike on the grid and had to start from pitlane.

The race settled down and Quartararo set an incredibly hot pace out front, pulling Marquez along with him as the two began to trade fastest lap times. Valentino Rossi had got ahead of Joan Mir (Team Suzuki Ecstar) at the final corner, whilst Alex Rins (Team Suzuki Ecstar) loomed in the background. There was a disaster further down the field as Mika Kallio (Red Bull KTM Factory Racing) crashed out at turn eight. The Finnish rider was okay, but his race was run.

Lap seven and Vinales had dropped out of contention for victory as the Spaniard struggled with a full fuel load in the early laps of the race. Andrea Dovizioso hadn’t been able to make any further in-roads on the riders ahead but had pulled out a half-a-second advantage over Franco Morbidelli, whilst Valentino Rossi was under pressure from the Suzuki pairing of Mir and Rins. Danilo Petrucci (Ducati Team) had dropped to ninth but was two seconds clear of Aleix Espargaro (Aprilia Racing Team Gresini) in tenth.

There was drama for Valentino Rossi on lap 10 and 11, as the Italian experienced a sudden drop-off in pace and found himself behind Rins and then Mir, the latter getting through at turn three. The 40-year-old nine-time champion picked his pace back up but was just 1.7s off the back of the Suzuki. With Rins in clear air, he set of after Morbidelli.

At half race distance, the gap was down between the leading two and Marc Marquez had hit stalking mode; the Honda rider just sat in behind the rookie Frenchman, shadowing him. However, Quartararo responded a lap later, setting a scintillating pace as the two riders duelled. Behind them however, Maverick Vinales was closing in and set his personal best lap of the race for a third consecutive time. The race was reaching an incredible climax, as the leaders began to concertina together.

Lap 15 saw Alex Rins make his way into fifth place, getting ahead of Franco Morbidelli, who was having a very strong and solid ride inside the top six, a position he had held all weekend. There was disappointment behind though, as Aleix Espargaro retired into the pits from a top ten placing. This promoted Takaaki Nakagami (LCR Honda Idemitsu) into the top 10.

The race was coming to a close and on lap 23, after a few laps of more-or-less riding pillion with Quartararo, Marquez showed his hand at turn three but ran wide, allowing Fabio back ahead. The crowd were on their feet as a second grandstand finish for a second consecutive year beckoned at the Chang International Circuit. Cheers and screams, the atmosphere was electric with history on the horizon in more ways than one.

On the final lap, Marquez tried again at turn three and this time it worked, as he pulled his Honda down to an apex and then blasted onwards to turn four. Quartararo had been strong in the final sector for the entire race however and built in momentum all the way through from turn eight.

Closing through every corner, Quartararo tried one massive lunge at turn 12, as the enormous Thai audience watched on. Going slightly wide, an opportunistic Marquez didn’t settle for a safe second and sliced back through to take the win on the run to the line, whilst the Petronas Yamaha SRT outfit had to settle for second. Maverick Viñales couldn’t get in on the action and in the end, was third.

Behind them, a magnanimous Andrea Dovizioso held on to fourth and Alex Rins took fifth from tenth on the grid. Franco Morbidelli was secured a sixth place ahead of Joan Mir, whilst Rossi could only manage eighth. Completing the top 10 were Danilo Petrucci (Ducati Team) and Takaaki Nakagami. Miller recovered for 14th.

An enthralling Moto3 World Championship rumbled into Thailand with great anticipation and expectation. Starting from pole position for the first time in his career, Celestino Vietti (SKY Racing Team VR46) looked to get the better of his rivals in order to achieve success at a track he’d never seen before.

However, a dramatic race happened nonetheless, going down to the final lap, and it would be Albert Arenas (Gaviota Angel Nieto Team) who snatched victory, ahead of Lorenzo Dalla Porta (Leopard Racing) and Alonso Lopez (Estrella Galicia 0,0), who took a career-first Moto3 rostrum. MotoGP now heads to Twin Ring Motegi in Japan on 20 October. 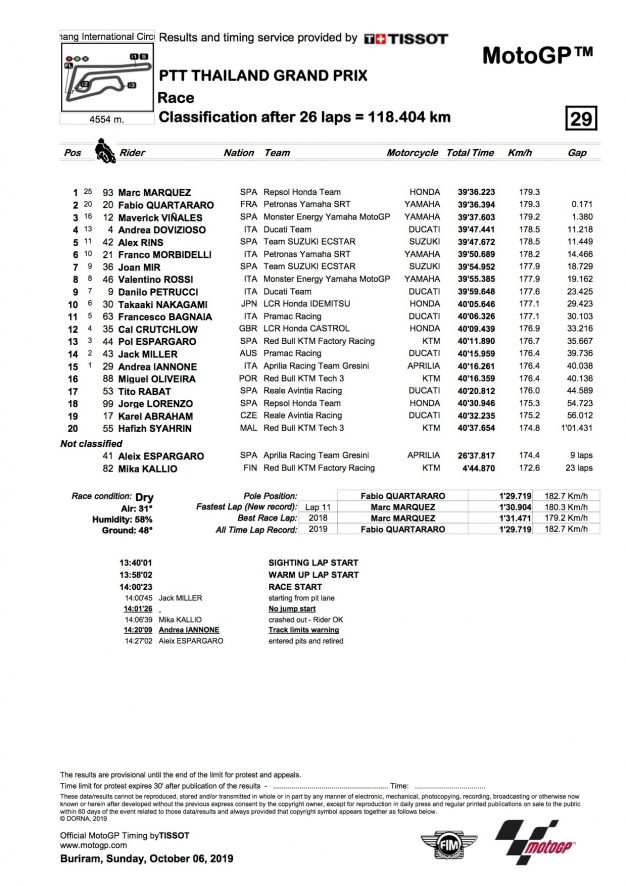 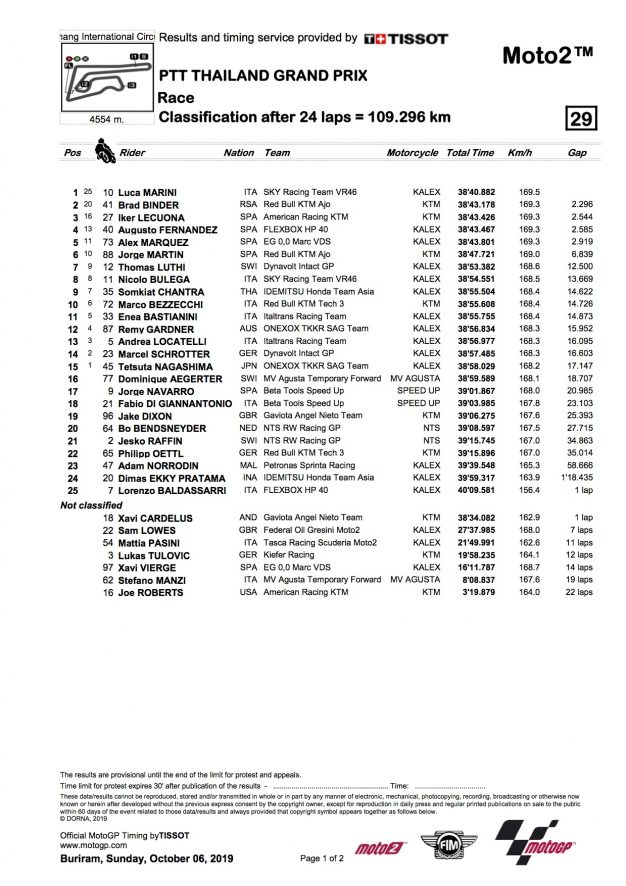 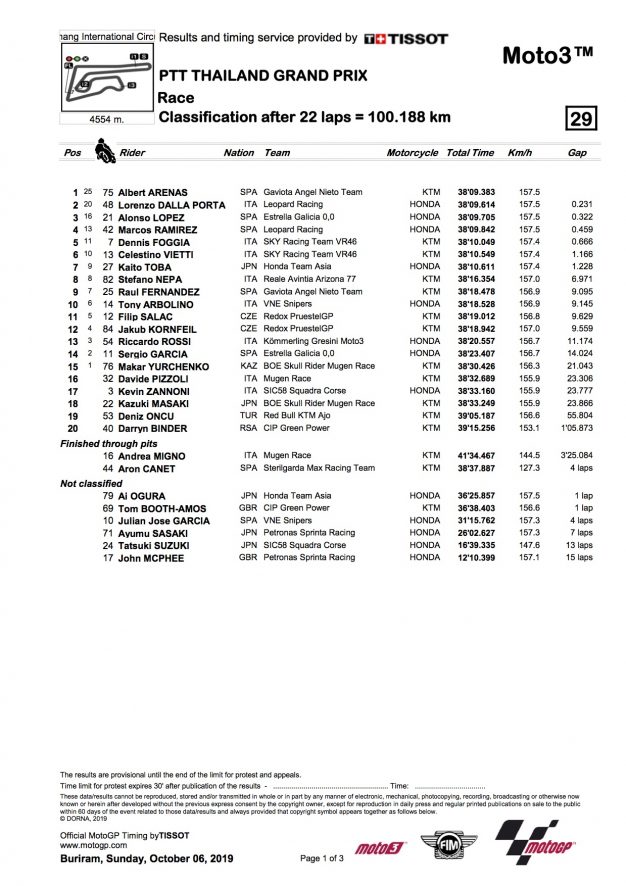