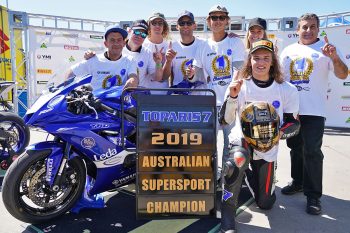 Landbridge Yamaha’s Tom Toparis has been crowned the 2019 Supersport champion in the Motul Pirell Australian Superbike Championship after securing victory during the opening encounter at Phillip Island’s sixth round.

The New South Welshman rode dominantly to the title this season, winning every race bar one in his campaign so far, as one round still remains on the calendar.

“I’m wrapped to win the championship – it’s my first time winning an Australian title,” Toparis explained. “I can’t thank my team and family enough – the Landbridge Yamaha team has done such a good job all year and we’ve won so many races.

“I’m so happy – after last year, we worked so hard to beat Cru, and now to do it here on the new Yamaha – it’s an awesome bike to ride. I’m grateful for everyone that’s given me the opportunity to win the championship.”

The newly-crowned champion will head out for Supersport race two this afternoon, scheduled for 2:20pm AEDT.