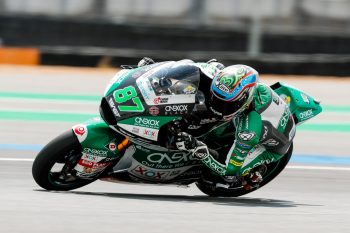 Remy Gardner admits he needs to ‘figure out’ his tyre selection moving forward after his front soft quickly deteriorated in the opening laps of the Thai grand prix last weekend.

The SAG Racing Team rider will evaluate whether switching to the hard option will be beneficial in the closing rounds of the series, the Australian scoring 12th position at the weekend.

“Today was a really frustrating day,” Gardner declared. “We struggled a lot with the speed of the bike and by lap five my front tyre was destroyed from the way I was having to ride in the turns and on the brakes.

“I spent the rest of the race saving the front from washing out, so it was not the result we wanted. I’m extremely disappointed and we need to figure out if we can keep using this soft tyre in all situations or if we need to change it for the hard tyre. The team and I know what we need to do, and we will fix it before the end of the year. Already looking forward to Japan.”

Gardner is ranked 12th in the MotoGP World Championship standings as the series heads to Japan on 20 October.