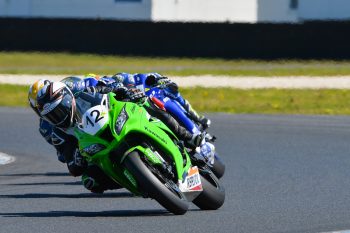 A motivating top five result at Phillip Island’s penultimate round of the 2019 Motul Pirelli Australian Superbike Championship (ASBK) has promoted the target of a podium finish for Matt Walters at the season finale next month.

The Kawasaki Connection rider rode strongly all weekend long at the Island, setting the third fastest time in qualifying to earn a front row start before recording a 7-5 scorecard for fifth overall.

The ASBK now heads to Walters home circuit of Sydney Motorsport Park, where he believes the podium should be the goal to complete his 2019 campaign.

“It’s one of the best weekends I’ve had in years, without a doubt,” beamed Walters. “The Kawasaki Ninja ZX-10RR was working great from the moment we got here, we had a strong qualifying session and obviously the front row start really helped in the race.

“The first race wasn’t too bad. I got pushed around in the first few laps and wasn’t able to get going, but in the second one I got a good start and got away good. Towards the end of the race, the tyre started to give way a little, so I thought it was best to stay on it and not wreck it. I really would’ve liked to be on the podium, but I’ll take what I can get at this point of the season!

“It’s good to be riding on the same level as the guys at the front and I think staying in the top five would be a fairly good finish for us at Sydney Motorsport Park. If we can get a podium – we were nearly lucky enough to get one today – but, being my home race at Sydney, I think we should be aiming for the podium or another top five.”

The New South Welshman is now ranked seventh in the championship standings as the first privateer entry.