Race one winner salvages P5 in the final outing. 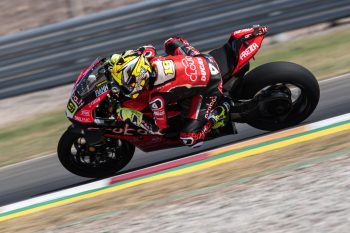 Alvaro Bautista says he experienced a sudden drop of grip during race two at the penultimate round of the 2019 Motul FIM Superbike World Championship (WorldSBK) in Argentina, which ultimately saw him salvage fifth position.

The Aruba.it Racing – Ducati contender, who won race one and was second in the Superpole race, challenged for the lead in the early stages, however 10 laps in, the Spaniard faced a battle with grip that would push him out of podium contention.

“In race two on the other hand, I started quite well,” Bautista explained. “Jonathan gained a few metres on me but because of his error I was able to catch him and we had quite a duel. After about 10 laps I began to feel an unexpected drop of grip at the rear which made me lose a few places.

“We still don’t know what happened, I was struggling to brake in the corner turn-in while on the exit, as soon as I opened the throttle I felt the bike spinning. It was a very difficult race and I’m disappointed because I think that today we could have fought for the win.”

Bautista has secured second in the championship standings ahead of the season-finale in Qatar, scheduled for 26 October.