Argentina podium a positive end to controversial round for Davies 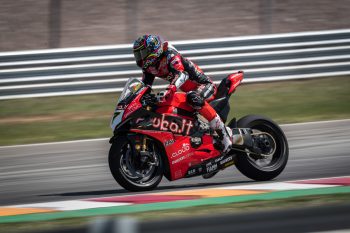 Scoring a podium in race two was a positive end to Argentina’s 12th round of the 2019 FIM Motul Superbike World Championship (WorldSBK) for Chaz Davies, who was one of six riders that sat out the opening encounter with safety concerns over track conditions.

The Aruba.it Racing – Ducati contender recorded a 4-2 scorecard, lifting the British ace’s spirits after being disappointed by Saturday’s controversy.

“It was a really good way to finish the weekend,” said Davies. “This morning in the Superpole race I was able to finish in fourth place which put me on the second row of the grid for race two. Unfortunately, in the second race I made a bad start and I was swamped by several riders at the first corner.

“I felt comfortable enough however and began to pick my way through the pack. When I got up to second place the gap to Jonathan was almost three seconds, and although I closed it down a bit, it was impossible to get any closer to him. Pity because I think if I had been there from the beginning, it might have been a nice race.

“However, we were competitive on another track, that’s four or five now where we’ve been near or on the podium. A big thanks to the team for their work but also for standing by me yesterday. Hopefully now we can go to Qatar and continue the momentum to finish the season strong.”

Davies sits seventh in the championship standings ahead of Qatar season-finale on 26 October.