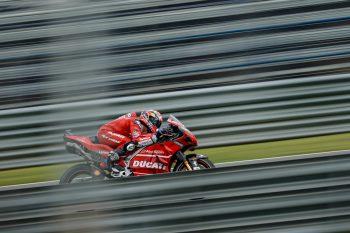 Andrea Dovizioso is focused on defending his runner-up position in the MotoGP World Championship rankings ahead of Motegi this weekend, the Ducati Team rider currently holding down a comfortable 48-point advantage over third’s Alex Rins (Team Suzuki Ecstar).

With Marc Marquez (Repsol Honda) already securing his sixth premier class crown in Thailand, Dovizioso is eager to finish the season the strongly, particularly in Japan this weekend where he believes the circuit will favour him.

“With the title already assigned in Thailand, our main aim now is to hold on to second place, and this is what we’ll be fighting for in the next four races,” Dovizioso explained. “Motegi is one of those special circuits where in the last few years we have been very competitive.

“Last year we missed out on the podium while fighting for the win, and I think that we will again be fast this year. We must continue to work hard to improve in all conditions and on all tracks and we’ll be giving our all in these last four races.”

The real fight for in the championship is the battle for the third, which sees Rins, Maverick Vinales (Monster Energy Yamaha) and Danillo Petrucci (Ducati Team) separated by just five points.