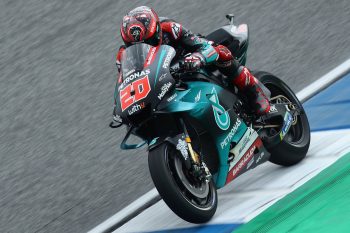 It was Quartararo who led the way on combined times with a 1m44.764s from Vinales, while world champion Marc Marquez (Repsol Honda Team) completed the top three on the opening day of action.

Three Yamahas topped the billing in FP1 at the Twin Ring Motegi as both Friday sessions were seemingly vital, both in terms of gaining a top 10 position for automatic Q2 entry and setting up for Sunday’s race with wet weather on the way on Saturday.

Vinales’ overall time was untouched for large parts of the second session, with Danilo Petrucci (Ducati Team) and Marquez the only big improvers inside the top 10 with half of FP2 gone.

With 10 minutes to go though, the soft rear tyres were starting to be put in. Fast lap-times were needed with FP3 predicted to be very wet, so the final few minutes of FP2 became a mini qualifying session for the MotoGP riders.

Riders such as Andrea Dovizioso (Ducati Team) were threatening P1, but Vinales came out and moved the goalposts even further, over half a second was the Spaniard’s advantage before Franco Morbidelli (Petronas Yamaha SRT), Dovizioso and Marquez all cut that gap back down to 0.4s.

However, another Yamaha was on the prowl as rookie sensation Quartararo hadn’t taken long to get accustomed to the Twin Ring Motegi on board his YZR-M1 as the Frenchman fired in a stunning time to go over three tenths clear, before running into the gravel at turn one to prematurely end his session.

That was pretty much all she wrote though, apart from a late personal best time from Valentino Rossi (Monster Energy Yamaha MotoGP) launching ‘The Doctor’ into P5.

The nine-time world champion sat outside the top 10 after FP1, so it was a solid afternoon for Rossi as his time meant all four Yamahas sit inside the top six heading into qualifying day at the Japanese GP, with third fastest Marquez and fourth placed Dovizioso splitting the quartet.

Dovizioso was eighth in FP1 as he now boasts top Ducati honours so far in Japan, the Italian jumping ahead of Jack Miller (Pramac Racing), who sits seventh overall, exactly where he finished on Friday morning. The Australian suffered a crash at turn nine in the latter stages of FP2, but is safely inside the top 10.

Having finished P13 in FP1, Petrucci jumped up the timing screens in FP2 to claim eighth ahead of rookie Joan Mir (Team Suzuki Ecstar). The Spaniard finished inside the top 10 in both sessions on Friday and sits ahead of his 11th-fastest teammate Alex Rins.

Miguel Oliveira (Red Bull KTM Tech 3) had a fast off at turn 12 in FP2, thankfully the Portuguese rider was able to walk away to continue the rest of the session, but he did venture to the medical centre for a check-up after his day had finished.

Moto2 World Championship leader Alex Marquez (EG 0,0 Marc VDS) found a late lap of 1m50.647s at the Motul Grand Prix of Japan to topple Red Bull KTM Ajo’s Brad Binder after the South African had set the pace for the majority of the day.

Marquez ended the opening day in Japan 0.181s clear of Binder, with the second of the Red Bull KTM Ajo riders, Jorge Martin, completing the top three, a quarter of a second adrift.

ONEXOX TKKR SAG Team’s Remy Gardner was a lowly 19th overall. The Australian crashed out, not once, but twice in a hectic FP2 session. First, the front-end folded on him at turn 11, before the front once again tucked moments later at turn five having come down pit-lane in between.

Top spot in Moto3 on Friday at the Motul Grand Prix of Japan went the way of Andrea Migno (Mugen Race) after the Italian posted a 1m56.742s with his final lap of the session. The Italian ended a tenth clear of Leopard Racing’s Marcos Ramirez and Petronas Sprinta Racing’s John McPhee. 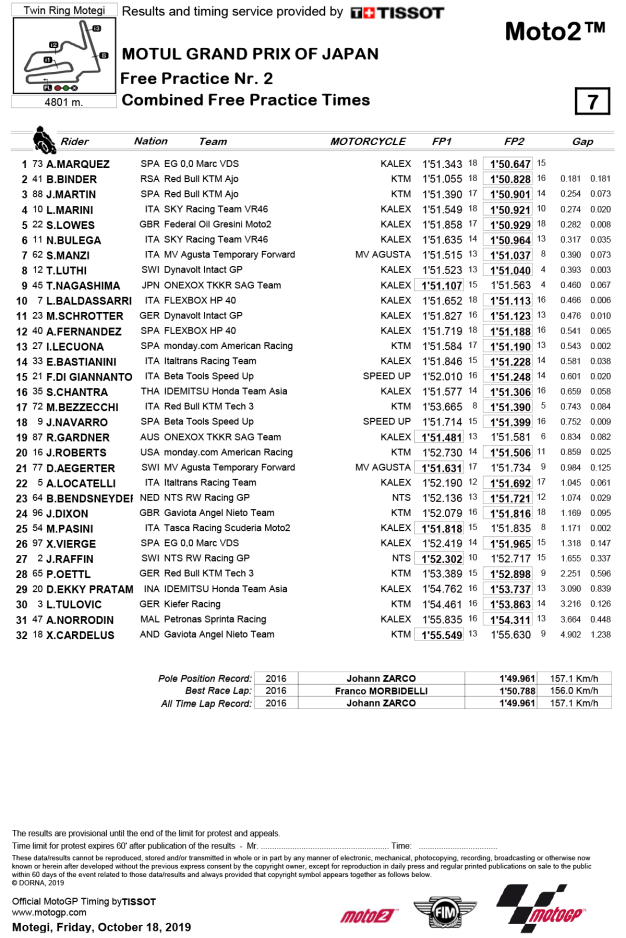 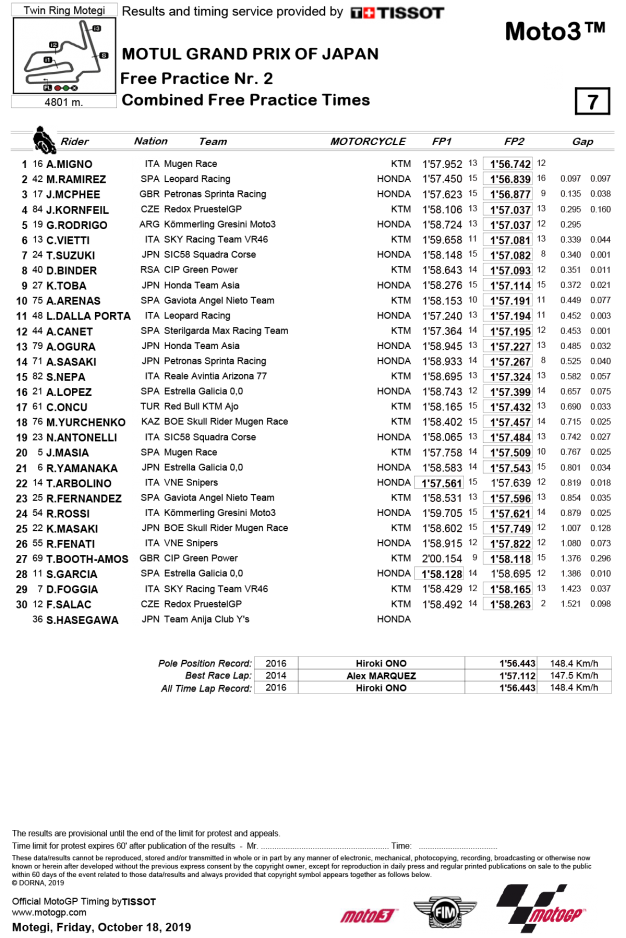