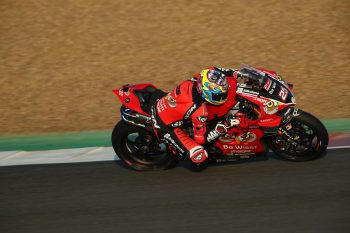 Australian Josh Brookes did everything he could in Brands Hatch’s Bennetts British Superbike Championship (BSB) finale to claim the title, however he fell just five points short after securing three race victories across the weekend.

The Be Wiser Ducati rider reduced what was a 28-point gap heading into the weekend, although teammate and WorldSBK-bound Scott Redding prevailed in the end to claim top honours.

Brookes, who started the season with a pair of DNFs, scored 18 podium finishes including 10 race wins throughout the championship.

“I came here with the objective of winning all three races and that’s exactly what I’ve done, so I can’t not be happy with how this weekend has gone, it’s ultimately elsewhere where I’ve lost out on the championship,” Brookes commented.

“A championship is judged on the whole year, not just one weekend and there are opportunities at every round to get points. There hasn’t been any time this year though where I don’t think I could have done better, but I can’t deny the fact I’m disappointed not to be returning in 2020 with the number one plate!

“I’m looking forward to next season and although Scott won’t be figuring, there’ll always be someone to step up and there’ll be plenty more challenges ahead.”