Australia's Miller salvages P10 at the 16th round. 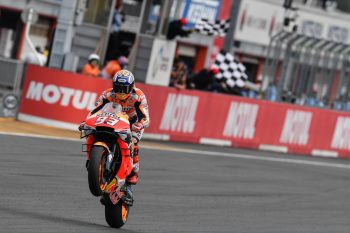 Recently-crowned champion Marc Marquez (Repsol Honda Team) took a commanding victory at the Japanese grand prix to wrap up the constructors’ championship for Honda, while Fabio Quartararo (Petronas Yamaha SRT) pushed him as hard as he could and took second to secure Rookie of the Year as Andrea Dovizioso (Ducati Team) was third.

It wasn’t the perfect getaway for polesitter Marquez but he held his advantage into turn one, with Quartararo braking later to get underneath his teammate Franco Morbidelli (Petronas Yamaha SRT) and start his stalking of the reigning Champion early.

But that allowed the fast-starting Jack Miller (Pramac Racing) to grab P3 on the exit of turn two, and a frantic opening lap then unfolded as Quartararo passed Marquez for the lead only for the number 93 to pounce back at the tight turn 10.

It was a late lunge from the Honda man as the duo ran slightly wide, with Quartararo looking for the cutback but almost losing the front, foot slipping into the air. That gave third place Miller a sniff at second, but the door quickly closed and the Aussie almost hit the back of the Frenchman ahead.

At the front, meanwhile, Marquez had pulled the pin. Eight tenths were his advantage over Quartararo as the duo started to break clear of the chasing pack, that then became a second as the rookie hovered close but not quite close enough. Further behind, the battle for the final place on the podium was getting intense, however, with Miller holding P3 as Morbidelli, Vinales and Dovizioso all started to close in…

It didn’t take long for Morbidelli to lead the trio past Miller, but the group was over three seconds off Quartararo at the midpoint of the race and after staying within almost-striking distance of the reigning Champion for the first half, ‘El Diablo’ was also starting to drop back.

With 11 laps to go, Dovi took Morbidelli before Viñales followed suit and it soon became Dovizioso vs Vinales for the final rostrum place, with two different machines making for an interesting concertina of a duel.

As the final few laps appeared on the horizon, Quartararo had been dropped by Marquez but the Frenchman would need to be careful. Dovi had fended off Vinales and the Ducati man was on a charge, closing in by eight tenths in a single lap.

Would it be enough? On the last lap, everything suddenly tightened up as Marquez cruised round for the win and Quartararo closed in – Dovizioso closing in on him…but the Italian couldn’t quite get close enough to make a final lap lunge. Marquez took the win, Quartararo second and Dovizioso third, all with big reasons to spray the prosecco with a smile on the podium – manufacturer glory, rookie genius and a century of rostrum finishes.

Vinales took fourth after just being denied the podium, ahead of Cal Crutchlow (LCR Honda Castrol) in P5 as the Brit beat Morbidelli by 0.047s on the run to the line to grab his first top five finish since the Czech GP. Morbidelli’s early podium hopes sadly faded as the Italian picked up P6 in Japan, with Alex Rins (Team Suzuki Ecstar) recovering from P11 on the grid to P7 in the race.

Teammate Joan Mir rode a solid race to finish just over a second behind Rins in P8, with the Ducatis of Danilo Petrucci (Ducati Team) and Miller rounding out the top 10. One name noticeably absent from that run down is that of nine-time world champion Valentino Rossi (Monster Energy Yamaha MotoGP), who had a tough race that then ended early in a crash, as was the situation for Andrea Iannone (Aprilia Racing Team Gresini).

Lorenzo Dalla Porta (Leopard Racing) is now seemingly in charge of the Moto3 World Championship, with the points leader stretching his legs at the Twin Ring Motegi to take his second win of the season and capitalise on a crash for key rival Aron Canet (Sterilgarda Max Racing Team).

Buriram winner Albert Arenas (Gaviota Angel Nieto Team) ran him close though, within a tenth by the line, with rookie Celestino Vietti (Sky Racing Team VR46) completing the podium and breaking some home hearts in the process. The MotoGP World Championship now heads to Phillip Island this weekend. 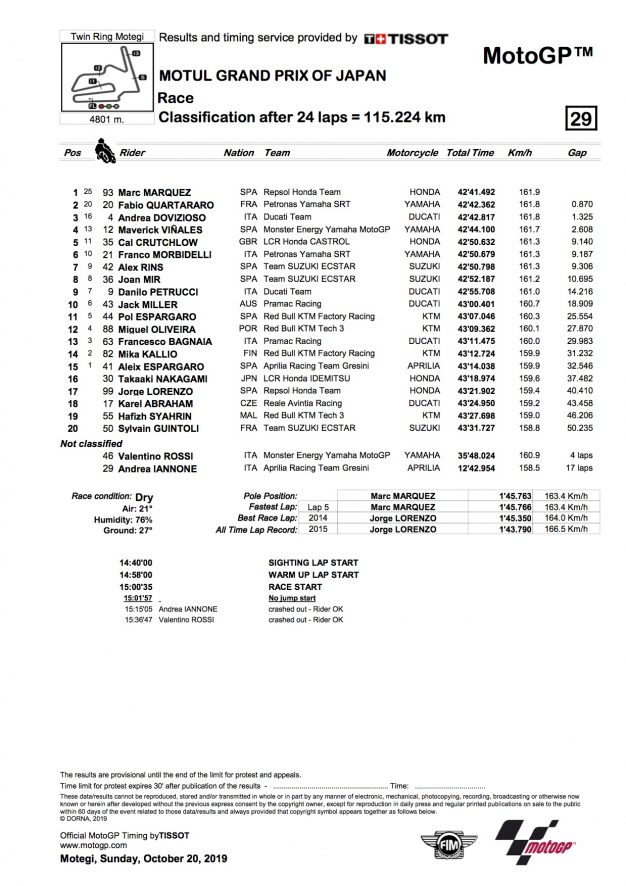 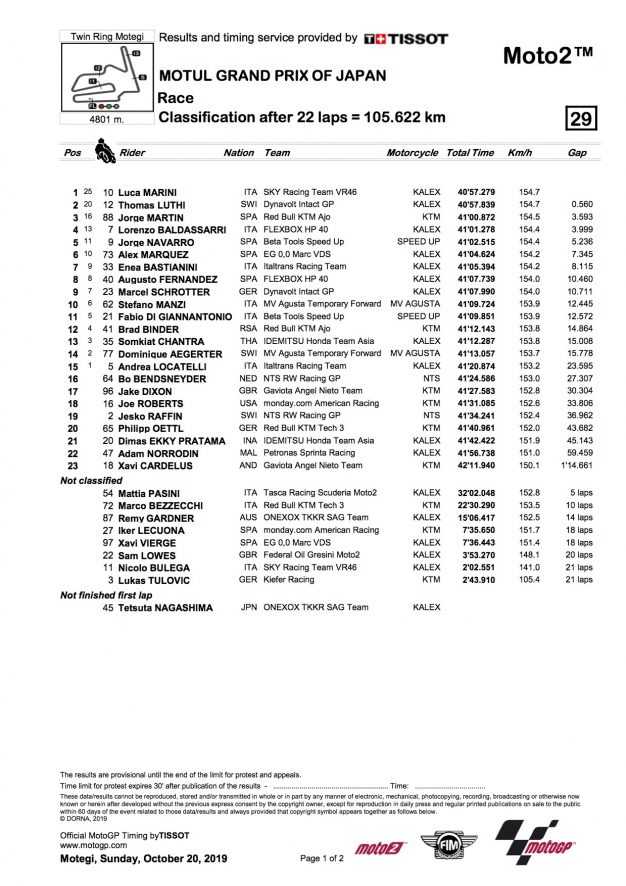 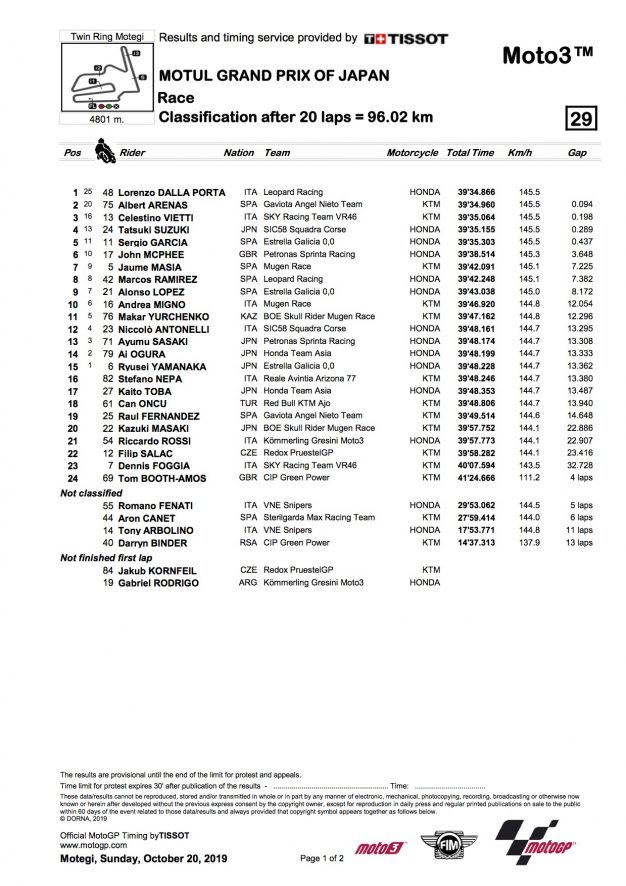