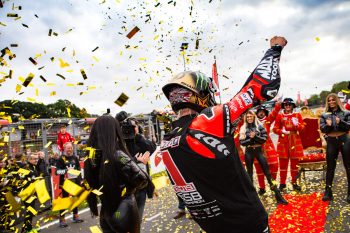 Scott Redding has clinched the 2019 Bennetts British Superbike Championship (BSB) in a thrilling final round at Brands Hatch.

The Be Wiser Ducati rider managed to fend off teammate and Australian Josh Brookes at the final round, who reduced Redding’s comfortable gap by securing three race wins. However, the British contender was able to get the job done with a third in the final outing of the weekend.

In the end, the Ducati pilot finished five points ahead of Brookes in the championship standings, earning 11 race victories across the season.

“I’ve had a lot of emotion – super happy, super proud and it is good to pay back everyone who has supported me through all my years in GP and my first year here in BSB,” Redding explained.

“A lot of people doubted me to win the championship in my first year, I knew deep inside I could do it even though I broke my femur one month before the first test of the year, I didn’t let it hold me back.

“I had a tough season, a great season. The feeling to cross the line knowing that you did it. It didn’t really sink in until I got half way round the lap. I was like ‘you’ve done it, it was just one race’. That was the hard bit.

“The BSB championship has been amazing, they’ve brought a lot of passion back into racing and I’ve had so much fun this year on and off track.”

The British ace has signed with Aruba.it Racing – Ducati to contest the Motul FIM Superbike World Championship (WorldSBK) in 2020.