SAG Racing ace crashes out at the Twin Ring Motegi. 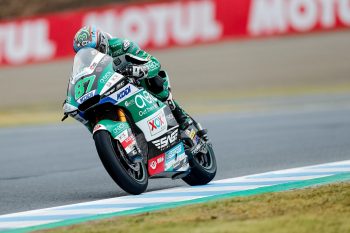 Australian Remy Gardner has admitted the error that saw him crash out of the Japanese grand prix on Sunday was his own doing.

The SAG Racing contender was caught up in an earlier incident, and admittedly pushed too hard while attempting to make up time on the main group of riders, going down in the process.

“When the race started, I dropped back but didn’t panic,” Gardner commented. “It wasn’t perfect but I felt comfortable and then I got caught up in the Vierge/Lecuona incident and lost a bunch of time to the group.

“I went down because I was pushing too hard, it’s as simple as that. The next race is my home GP at Phillip Island and I will give it everything to get a result that we deserve there.”

Gardner is ranked 12th in the Moto2 World Championship following a string of difficult rounds, as the series heads to Phillip Island this weekend for the Australian Motorcycle Grand Prix.