Italian contender charges from the third row at the 16th round. 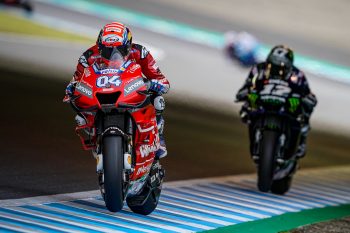 Starting from the third row, Andrea Dovizioso put on an incredible charge at Motegi’s 16th round of the MotoGP World Championship to land on the podium.

The Ducati Team ace positioned himself inside the top five in the opening stages before going onto make his way inside the top three, hunting down runner-up Fabio Quartararo (Petronas SRT Yamaha) in the closing laps, however ultimately falling shy of the number two position.

“At the end of the race my feeling with the bike was really excellent, so much so that we did our fastest lap on the penultimate lap,” Dovizioso explained. ‘Unfortunately, I wasn’t able to pass Quartararo, who I saw was in a bit of difficulty in the final stages, but I think I could have overtaken him if there had been one more lap.

“I’m quite disappointed with my first part of the race however, because despite having good grip we were unable to be fast enough. We’ll now have to analyze the situation in detail to understand what the problem was and be ready for the race at Phillip Island.”

The Italian has a firm grip on second in the championship standings as the series heads to Phillip Island this weekend for the Australian Motorcycle Grand Prix.