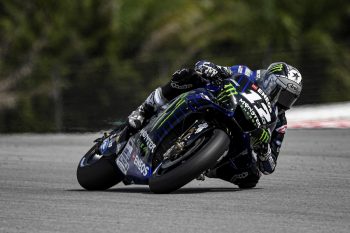 Maverick Vinales has broken through for his second victory of the season at Sepang’s penultimate round of the 2019 MotoGP World Championship.

Starting from P11 – his worst qualifying since Mugello 2015 – Marquez needed a lightning start. Both he and Dovizioso, the Italian starting P10, did exactly that as they blasted into turn one.

Australian Jack Miller (Pramac Racing) launched from P4 and managed to grab the lead on the opening lap, but it was a bad start for polesitter Fabio Quartararo (Petronas Yamaha SRT) as the Frenchman fell to P7, Marquez getting the better of him immediately.

It didn’t take long before Vinales had snatched the baton from Miller though, the Yamaha sliding up the inside of the Ducati at Turn 11 as Marquez passed Franco Morbidelli for P4 on the opening lap. A frantic first lap wasn’t over though as Dovizioso and Miller battled for P2 at turn 14 and turn 15.

The Desmosedici duo ran slightly wide at the final corner and sniffing a chance, Marquez pounced and sat up Miller – but the Australian grunted past Marquez heading into turn one on lap two. The jostling was only helping Vinales’ cause though, the number 12 rider raced to a 0.6 second lead as he set a 1m59.9s on lap two to unleash himself from the MotoGP freight train.

Marquez knew he had to make up ground quickly and on lap three the world champion was past Miller for P2, but it was going to take some doing to reel in Vinales.

With Vinales flying and Marquez chasing, the battle for the final podium spot was well and truly on. Dovizioso grabbed P3 from Miller on lap four and the Doctor was also going great guns to challenge Miller too. After a couple of goes, Rossi dispatched Miller at turn nine as the Australian saved a crash – was the Pramac man hitting tyre troubles in the soaring heat?

Well, shortly after, things got heated between Miller and Alex Rins (Team Suzuki Ecstar) at the final corner as the two made contact. At the front, Vinales was holding a 1.4/1.5s lead over Marquez as Dovizioso and Rossi were unable to keep tabs on the Honda. It quickly became a battle for the final podium spot between the two veteran Italians, with Rossi finding it tough going to make a pass stick due to Dovizioso’s superior straight-line power.

While Miller slipped back into the clutches of Petronas Yamaha SRT duo and Johann Zarco (LCR Honda Idemitsu), Rins was making forward progress. Vinales was comfortable out front, Marquez wasn’t being troubled in P2 but the P3 battle was on. Dovi vs Rossi, Rins closing in. With six laps to go Rins had cut a two-second gap down to under a second, with Rossi again unable to make a late, lunging pass at turn nine stick on Dovizioso.

Heading onto the final couple of laps there was nothing to choose between Dovi, Rossi and Rins for P3. Vinales was now three seconds clear of Marquez as the duo rounded the final lap to claim tremendous respective results. Vinales untouchable in Malaysia, Marquez claiming another top-two finish.

Rossi’s wait for a podium goes on after being unable to get the better of Dovizioso in Sepang, but it wasn’t through a lack of effort. Rins bridged the gap to the Italians but couldn’t ultimately mount a challenge for a rostrum. It wasn’t the Sunday Petronas Yamaha SRT would have been looking for as Morbidelli and Quartararo picked up P6 and P7 respectively.

Miller slipped back to P8 to finish as the second Ducati, Danilo Petrucci (Ducati Team) notched up P9. Closing out the top 10 was Joan Mir (Team Suzuki Ecstar) after the Spaniard was involved in an incident with Zarco at turn 14.

With four laps to go, while battling with Miller, Mir made a lunge up the inside of the Frenchman which led to the Honda rider crashing. Mir was judged to have been at fault as the rookie was handed a long-lap penalty.

After outstanding weekends in Australia, Malaysia wasn’t so fortunate for Andrea Iannone (Aprilia Racing Team Gresini) and Cal Crutchlow (LCR Honda Castrol). Both riders crashed during the race, both riders were thankfully ok.

EG 0,0 Marc VDS’ Alex Marquez is the 2019 Moto2 World Champion after coming across the line second at the Malaysian grand prix behind Red Bull KTM Ajo’s Brad Binder, who did all he could to take the title fight down to the final round by taking his fourth win of the season. Tom Luthi (Dynavolt Intact GP) was third, as Australian Remy Gardner (SAG Racing) claimed 14th.

Lorenzo Dalla Porta (Leopard Racing) produced a champion’s ride to claim his third-straight victory of the season at Sepang. The 2019 Moto3 title winner beat rookie Sergio Garcia (Estrella Galicia 0,0) and Jaume Masia (Mugen Race) – who started from the back of the grid – in an intensely fought lightweight class contest.

The MotoGP World Championship now heads to Valencia in Spain for the final round of the series on 17 November. 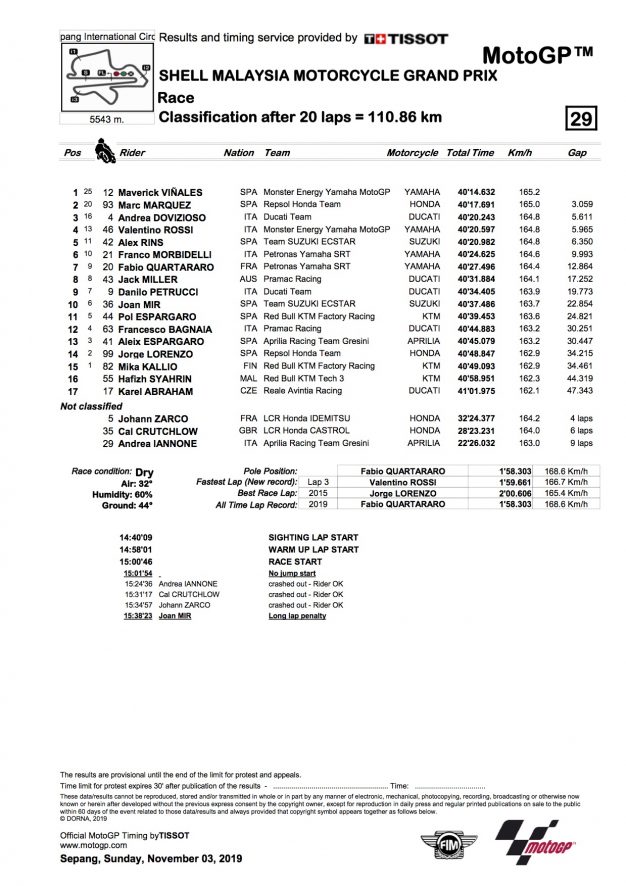 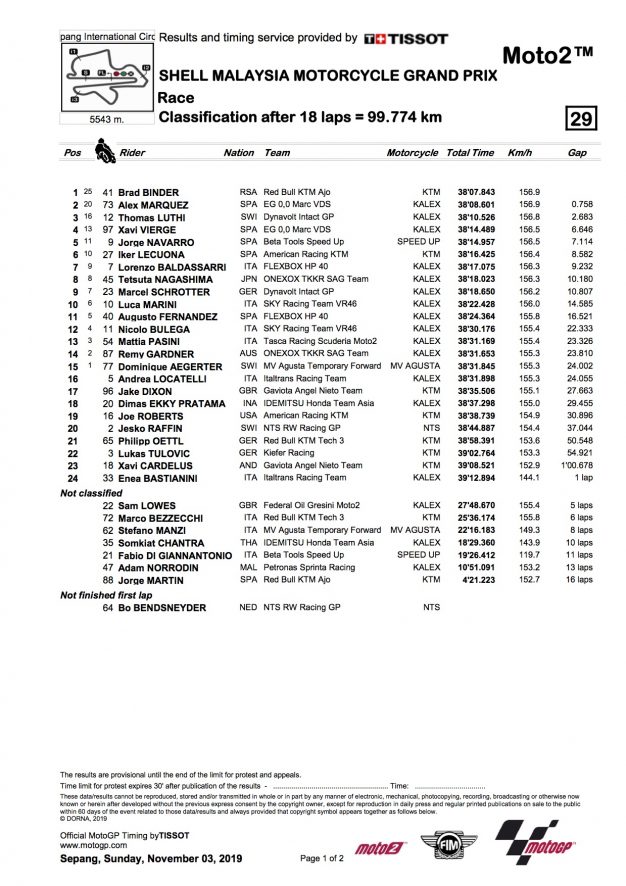 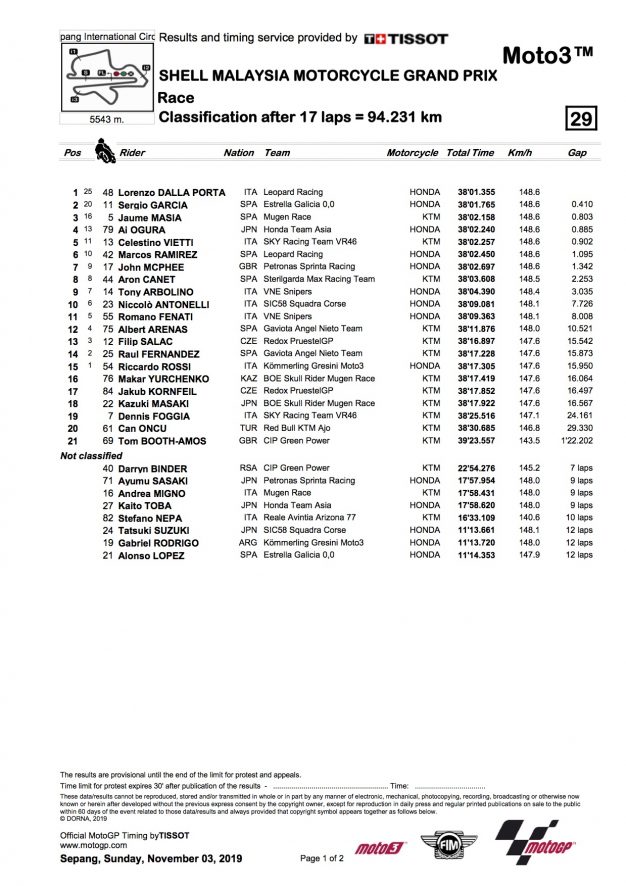