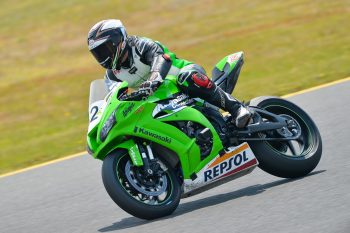 The Ninja ZX-10RR rider overcome a challenging start to the weekend at the Eastern Creek venue, qualifying in 10th position with a 1m31.300s lap-time to start on the fourth row.

Walters charged to 11th in the opening 13-lap outing in hot and humid weather conditions on Sunday, which was enough for him secure the top privateer award for season 2019 – the second year in a row that he has done so.

The Hunter-based New South Welshman then completed the season with an improved showing in race two in front of a home crowd, racing to seventh place for eighth overall. He was also later awarded the Iron Man award of the entire series.

“It wasn’t too bad of a weekend,” Walters commented after also recording a PB lap of 1m30.790s in race one. “I would’ve liked to have been up in the top five for my home round, but I simply didn’t have the pace to go with the front guys.

“It was good to be back in this position though, because I had no crashes throughout the year and we claimed back-to-back privateer championships. I’m really happy and it was a nice way to finish off the weekend.”