In a winner takes all affair, it was DesmoSport Ducati’s Mike Jones who reigned supreme at Sydney Motorsport Park’s 2019 Motul Pirelli Australian Superbike Championship (ASBK) finale, lifting the title after two thrilling performances. In Debrief, the Queenslander reflects on his weekend and championship-winning season. 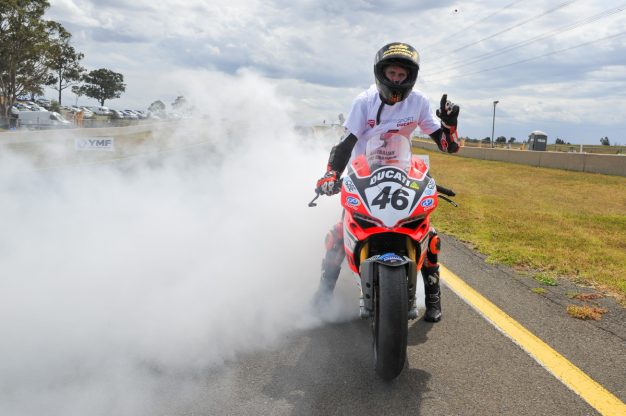 Congratulations on being the 2019 ASBK champion, it’s a massive result and it was an awesome race today…

Yeah, thanks very much. It’s just an incredible sensation to come away as the 2019 Australian Superbike champion – it’s a massive result for not only myself, but also for the all hard work from the DesmoSport Ducati team and the team sponsors and supporters, along with my personal sponsors and supporters as well. The hard work has paid off and we’ve come away with the win.

Today the final round ended up being a winner takes all scenario. You were seventh on the grid, which was uncharacteristic there, but obviously you did a 1m29s earlier in the weekend so the pace was there. From what I saw today, you got to the front early, fought hard against the best in the business and got the job done, so there must be a real sense of satisfaction in that.

Definitely. Coming into this weekend, basically the best rider of the weekend was going to be the champion. Qualifying, like you said, was uncharacteristic, and it was very frustrating at the time. Honestly, it gave me motivation and made me realise how badly I wanted to win the championship. At the end of the day today, that’s what it came down to – I wanted it so bad, I believed in myself that I could do it and I believed in the team and the equipment we have. I just believed we could do it. That’s really all it came down to. The races were very tough against the strongest competition Australia has to offer, so it’s very, very rewarding and satisfying to come away with the win against those guys.

You’ve won the title before in 2015, but obviously, the series wasn’t as strong and the depth wasn’t as strong either. You’re already an Australian Superbike champion, but now you’re a two-time champion and, this time, everyone was here and the series is better as well. Was that important to you?

Yeah, definitely. Becoming the 2015 Australian Superbike champion was a good feat for me, but as you said, the way the sport was at the time, it was a tough time and the depth of the field wasn’t there. I did compete against the riders in other championships at different circuits and I was competitive there also though, so for me, I believe I was champion that year regardless of the depth of the field. For sure though, to be able to truly do it this year is very, very meaningful. 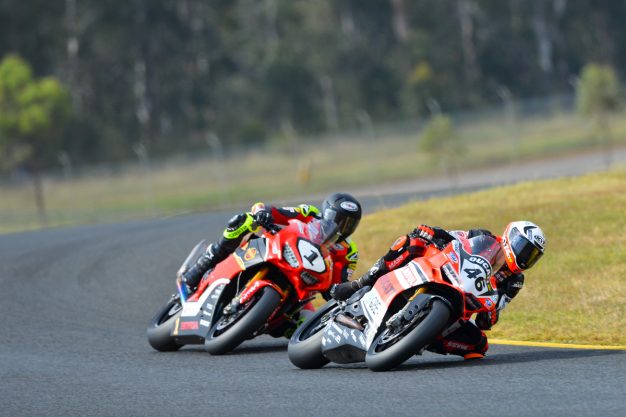 It’s like we’ve you seen you develop with DesmoSport Ducati co-owner Ben Henry in a sense, because although we’ve seen you go overseas in between, you’ve come all the way through with him to the level that you’re now at. These days obviously Troy Bayliss is in the mix also, but yourself and Ben have had a lengthy journey together!

For sure, because we started out on the Superbike in 2014 just as a privateer outfit with my father, brother and myself, and then 2015 we came on-board with Ben while keeping a similar sort of outfit, but with a lot more support. Since then, we’ve progressively developed. In 2016, I went on with DesmoSport Ducati with Ben and Troy and then headed overseas for two seasons racing with Ducati and Kawasaki, but now coming back this year, it’s shown I’ve grown as a rider and all the experience that I’ve gained has helped me develop. I feel like the racing I did overseas was a big contributor to me developing as a rider too, because with my age at 25, I feel I’m more mature than I was when I first started Superbike racing. It’s all led to being able to challenge for the title and ultimately win it again this year.

Ben and Troy both mentioned earlier that next year you will have the number one plate on the V4. Is that the plan at this stage?

Yeah, that’s right. Obviously, as a competitor, I’d love to be overseas racing again, but the sport is very tough and I’m not in a position to do that. However, I’m very excited to return to the Australian Superbike Championship next year and challenge for the championship on the new V4 R with the DesmoSport Ducati team.

So, the desire is still there to eventually make your way back overseas? Even Troy, a three-time world champion, said that you were definitely world-class, so the capabilities are there.

Yeah, for sure. I believe I have the ability to compete against the guys in the world championship, whether it’s WorldSBK or MotoGP, I believe I have the ability to do so. Obviously, being more realistic, it would be WorldSBK based purely on my age. The sport is very much based on opportunities, but it’s hard to create opportunity and sometimes things just fall into place at the right time. At the end of the day, the main thing I think you need to be doing is winning and it doesn’t matter where you are in the world, as long as you’re winning, that does create opportunities. For me, if I can put myself in a position to win races and the championship again next year, that’s the best thing I can do.

Thank you, I really appreciate it.