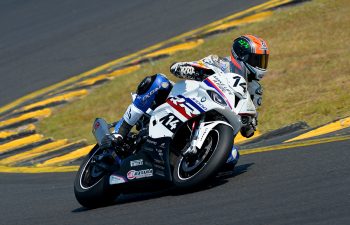 The final round of the Australian Superbike Championship (ASBK) headed to Sydney Motorsport Park (SMSP) last weekend, which saw Maxima BMW’s Glenn Allerton finishing the year off with a pair of eighth place finishes.

After a promising first outing on the all-new 2019 BMW S 1000RR at the Australian MotoGP the weekend before the grand finale of the ASBK we were eagerly awaiting to see what the new bike could do on the 3.95km Gardner GP Circuit.

Each time Allerton hit the anti-clockwise eleven corner circuit saw him improving his lap times. More importantly, it confirmed that Allerton does ‘love’ the 2019 German machine because of the handling and confidence that he is gets from the bike.

“From a personal point of view, I’m very happy with where we have ended up with the bike over the course of the three practice sessions,” said Allerton, who finished tenth in the overall combined times on Friday after recording a 1min31.823 in the third and final session.

While the new S 1000RR was proving to be a great package overall, Allerton was getting slightly hampered with an electronic issue which was reducing the full potential of the bike.

“Overall, I’m very happy with the progress we have made. We are getting closer, we just have to fine tune a few things and make the throttle a bit smoother. The 2019 BMW S 1000RR has so much power, it just wants to ‘go’ all the time. When I want to do a fast lap time it’s just a bit difficult as the bike is quite ‘sharp’ and just wants to take off,” added Allerton.

After a bit of a scramble after Timed Practice on Saturday morning, the Next Gen Motorsports team decided to go back to 2018 BMW S 1000RR, which hasn’t been ridden at Sydney Motorsport Park since last year in June, at a test day ahead of the Darwin round.

Having finished in thirteenth place in Timed Practice, Allerton had to go through Qualifying one to try and book himself a ticket into Qualifying two. With the decision made to swap back to the 2018 S 1000RR, it proved to be a positive idea, Allerton topped the time sheets in Q1 with a 1min31.602.

In between Q1 and Q2, the team made a rear shock change, which made the S 1000RR even better to ride according to the three times Australian Superbike Champion.

Allerton managed to drop his time by .347sec in Q2, which saw the New South Welshman stopping the clock with a 1min31.255. His time was good enough for ninth place on the grid, which was the 76th time that Allerton had qualified inside the top ten.

The opening thirteen lap race was a difficult race for Allerton as he got an average start of the line. On top of that he struggled for grip throughout the race.

Dropping to as low of tenth place through the mid-part of the race, Allerton managed to make up a few spots in the last few laps of the race to come home in eighth place.

“I was happy to be able to make up some places towards the end of the race. It’s not where I wanted to finish and race at as I wanted to be up the front of the field a bit more,” said Allerton after race one.

“For race two, we’ll make a change to the rear shock and make it softer. Hopefully that will fix a few things and get some rear grip out of the Maxima BMW S 1000RR. Right now, it’s a bit of a struggle.”

Unfortunately, the second and final race of the 2019 season was another tough race for Allerton.

Allerton, who now has 169 ASBK race starts in the Superbike category, pretty much rode around by myself throughout most of the race. He managed to get by one rider by the end of the race. However, according to Allerton, just like race one it was a difficult race to try and ride the S 1000RR without rear grip.

“I have simply just struggled with rear grip all day,” admitted Allerton.

“I’m a bit disappointed that I was unable to give the team a good result, which they deserve. The whole team have just worked so hard throughout the season and I want to thank them all very much,” expressed Allerton, who finished seventh overall for the round with 26-points scored for the round.

“I really feel like that we keep chipping away and we are getting better and better. It just seems like we need a break through. Today’s results don’t show how much work and effort has gone in throughout this weekend and the year its self,” finished Allerton, who ended up thirteenth overall in the championship standings with 108-points on the board.

Maxima BMW’s Team Manager, Wayne Hepburn, expressed that the overall weekend was “ok” as a whole.

“We have proven that the new 2019 BMW S 1000RR is a fantastic bike and with more development and testing time during the off-season, the bike will no doubt be a race winning bike in the 2020 season,” explained Hepburn.

“The race results however weren’t exactly what we were hoping for, after the times we saw from Glenn in Qualifying. However, he still did his very best to get the best results possible.”

Hepburn explained that the 2019 season has been an up-and-down year for everyone involved, but he’s more confident next year will bring better results.

“This year has been tough, there is no lying about that. However, we’ll hit the reset button and turn our attention to 2020 and begin testing on the 2019 BMW S 1000RR straight away and develop it into a race winning package,” he said.

“I have to say thank you to the entire team for all of their hard work throughout the season and not forgetting our great sponsors who have stuck by us during the year. I’m already looking forward 2020 to see what we can do as a team,” finished Hepburn.