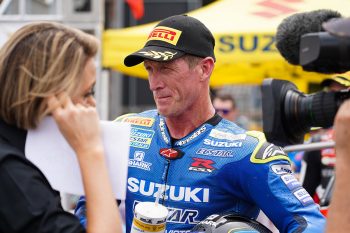 The dream winning result for Wayne Maxwell on return to Suzuki didn’t quite eventuate at Sydney Motorsport Park’s final round of season 2019 on Sunday, but he’s vowed to return for more next season.

Maxwell was one of the leading starts in a memorable Motul Pirelli Australian Superbike Championship (ASBK) battle, which was finally won by newly-formed rival Mike Jones in a clutch performance.

At 37, the ever-determined Maxwell was left puzzled yesterday afternoon in Sydney after being unable to factor in the race for the title across both 13-lap premier class races on his way to P3 overall, however, positives were evident over the course of seven rounds.

“We definitely didn’t have what we needed to today,” Maxwell told CycleOnline post-race. “It’s easy to say that we were in it and that we lost it at the final round, but we really lost in with two DNFs early in the year – two things that we couldn’t control.

“Everything else that we could control, we did pretty well, so I’m super-proud of everyone at Team Suzuki Ecstar and proud of myself to come to a new team, get some strong results and improve my riding again. We have a lot of positives to take, even though we’re gutted. It’s hard to swallow.”

With Team Suzuki Ecstar understood to be considering downsizing ahead of 2020, despite both Maxwell and teammate Josh Waters being contracted through next year, it would be Maxwell in the box seat to retain a factory-supported GSX-R1000R if the team does scale back. He plans on getting to work on the project as soon as next week.

“After next week we’ll have a decent debrief and come up with a plan to tackle 2020 head-on,” he added. “I knew after race one that we needed something, but it’s difficult to make too many improvements between races. We tried something, but it wasn’t what we needed and we probably went a little bit in the wrong direction, to be honest.”