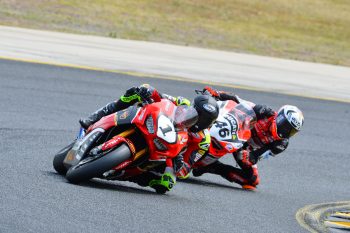 Just half a point separated the duo heading into the final race of the season yesterday afternoon at Sydney Motorsport Park, where they put on a thrilling display of riding.

Herfoss traded the lead with Jones on a number occasions across the 13 laps, however it was an error from a desperate attempt to regain the lead in the dying moments that ultimately saw the Penrite Honda Racing ace forced to accept runner-up in the championship.

The multi-time champion credited Jones for his exceptional riding, admitting he couldn’t stay in front of the Ducati pilot after several attempts.

“I’ve had a lot of close races before with a lot of good riders, and that is one I’ll definitely never forget,” Herfoss told CycleOnline.com.au. “With half a point it, it made it even more intense. We showed a lot of respect for each other and Mike did a great job – he rode really well – probably the best I’ve ever seen him ride.

“Hats off to him – it’s definitely one I’ll never forget, but I would’ve been nice to have won it. It’s not the result we came here to get, but we all did our best and put ourselves in the best position possible to win the championship.

“We were so close in the end – down to the last few corners, really. I tried so hard to win it and I fought so hard in the last few laps, but I just couldn’t stay in front of him.”

Herfoss has already signed to remain with Penrite Honda Racing in the 2020 Australian Superbike Championship.