Racer comments from New South Wales' seventh round of the year.

A selection of riders detail their weekend at Sydney Motorsport Park’s seventh round of the 2019 Motul Pirelli Australian Superbike Championship (ASBK). Team and privateer competitors can submit comments to [email protected] by Monday afternoon following events for inclusion in the post-event Quotebook feature. 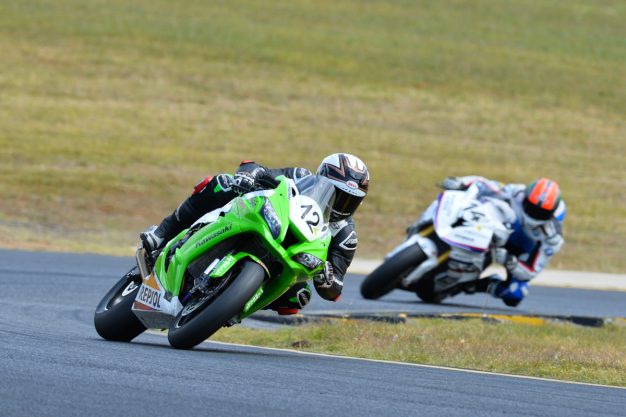 Bryan Staring (Kawasaki BCperformance) – 13th overall:
Again, it was a weekend where we had quite good potential, so I was pretty disappointed to miss the podium in race one. It was a shame because we’ve been a bit light on with podiums in the second half of the season and I really wanted to deliver one for the team. In race two I was pushing for the podium again and I went down riding my absolute hardest to get that top three finish. I went down fighting, but it doesn’t make it feel any better! The positive thing is that we were super-competitive racing in the front group again and we will take the positives from that.

Ben Burke (Kawasaki BCperformance) – 11th overall:
I think we did all we could for a one-off round. It’s been a long time since I’ve ridden a Superbike and you can’t just step back on them and be fast. In the second race I beat a couple of ASBK regulars, so I’m actually pretty chuffed with myself!

Troy Herfoss (Penrite Honda Racing) – Second overall:
It’s not the result we came here to get, but we all did our best and put ourselves in the best position possible to win the championship. We were so close in the end – down to the last few corners, really. I tried so hard to win it and I fought so hard in the last few laps, but I just couldn’t stay in front of him. Congratulations to Mike [Jones] and his team, but also to our team as well, because we did a really good job this weekend. We were really competitive throughout the round and I was the only one able to stay with Mike in both races. A big thank you to everybody at Penrite Honda Racing.

Mark Chiodo (Penrite Honda Racing) – Sixth overall:
It was a good weekend. We’ve shown some speed at some rounds this year, but we haven’t been able to put it together. This weekend was different though, we were quick in every session on Friday and Saturday we were really quick, but I expected the races to be tough. I still went 7-6, which was pretty good, and they’re two decent race results to finish the year.

Glenn Allerton (Maxima BMW) – Seventh overall:
I was happy to be able to make up some places towards the end of the race. It’s not where I wanted to finish and race at as I wanted to be up the front of the field a bit more. I have simply just struggled with rear grip all day. I’m a bit disappointed that I was unable to give the team a good result, which they deserve. The whole team have just worked so hard throughout the season and I want to thank them all very much. I really feel like that we keep chipping away and we are getting better and better. It just seems like we need a break through. Today’s results don’t show how much work and effort has gone in throughout this weekend and the year its self.

Matt Walters (Kawasaki) – Eighth overall:
It wasn’t too bad of a weekend. I would’ve liked to have been up in the top five for my home round, but I simply didn’t have the pace to go with the front guys. It was good to be back – I had no crashes throughout the year, and we claimed back-to-back privateer championships. I’m really happy and it was a nice way to finish off the weekend. I think throughout the year, the highlight was qualifying third at Phillip Island. It’s not a race win, but it shows we have pace, and we’re slowly working towards it. From a shop, our little team is getting better and better, especially with developing the bike and our set-up. I think come next year, we should be in the box seat to have a really good package with a really good bike that can compete with the factory teams.