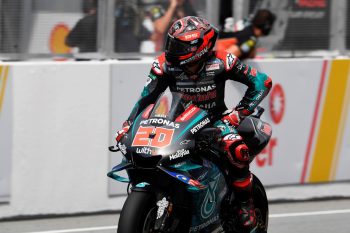 Fabio Quartararo has described his top 10 finish at Sepang as a ‘tough race’ after he was unable to match the pace of the leaders despite starting from pole position.

The MotoGP rookie admitted he struggled to stop bike during the opening stages of the 20-lap outing, which saw him salvage seventh after what looked to be a really promising weekend.

“It was a really tough race, and I struggled a lot,” Quartararo declared. “My first lap was a disaster, and I couldn’t stop the bike – which is an issue we haven’t had all weekend. We couldn’t make the result we wanted despite having the pace to fight for much better, and we have to figure out why that was the case.

“We’ve got one more race to go this year and we need to focus on that so that we can go out well at Valencia, especially as we’re going there much more experienced than we were twelve months ago when we tested there.”

The Frenchman is ranked sixth in the championship and continues to lead the Independent standings as the series heads to Valencia in Spain on 17 November.