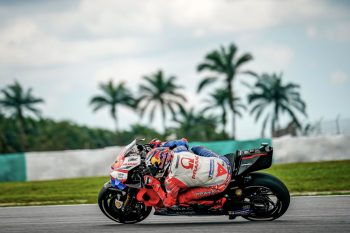 Australian Jack Miller has downplayed the contact Alex Rins (Team Suzuki Ecstar) made with him during the Malaysian grand prix, the Pramac Racing rider labelling it a racing incident.

The fan-favourite, fresh from scoring a podium during his home grand prix at Phillip Island one week earlier, qualified fourth for Sunday’s race, where he remained in the front group early on before fading to eighth.

“It’s not the first time, it’s not the last time,” Miller stated. “It’s racing, we have to touch, but sometimes, the Suzuki turns well, so I guess it’s inviting to be able to make moves like this.

“But it’s difficult for us on the Ducati, especially on such a corner like this with off-camber, hairpin, very slow – we need to sort of square it up, but as soon as you do that, you leave a little bit of space for guys to do this.

“He was obviously in a hurry to get through, I guess. Marc did it there as well, same thing, but he was a little bit more polite about it, let’s say. Rins really did just drive into the side of me. There was contact coming from both ways, let’s say.

“Because I’m on my normal line, just trying to ride my normal line like I do every lap. And like I said before, that Suzuki turns well. I mean, Barcelona, there’s many tracks on the calendar where we’ve had moments like that.”

Miller is ranked eighth in the MotoGP World Championship standings as one remains at Valencia in Spain on 17 November.