Italian sets new in race lap record on the way to P4 result. 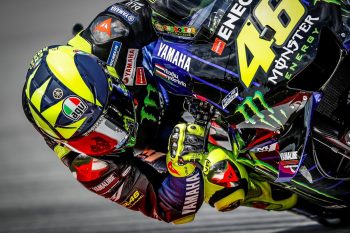 Valentino Rossi admits he’s still satisfied with his performance at Sepang’s penultimate round of the 2019 MotoGP World Championship, despite coming up short on earning a podium result.

The Monster Energy Yamaha rider displayed a surge in form during the Malaysian grand prix as he set a new in race lap record, however a battle for third with Andrea Dovizioso (Ducati Team) in the closing stages of the 20-lap encounter ultimately saw the multi-time world champion forced to accept P4.

“I had a good start, but then on the first straight some riders overtook me,” Rossi commented. “After that I was very competitive. I managed to set the fastest race lap, a new track record, and made several overtakes, until I got close to Dovizioso.

“Together with Dovizioso we had a good fight – it was very nice. I was a little better in the twisty parts of the track, but Dovizioso was faster on the straights. I hoped that I could be quicker on the last laps, but I couldn’t. We are faster in the turns, but it is also true that we stress the tyres more when we are cornering.

“So, at the end I wasn’t as fast as I was at the beginning, but I’m happy because the degradation was less than usual. At the end I’m satisfied, because during this weekend I rode well, and I learned a few things. We are making improvements, trying to use all the potential of the M1. At the end I managed to keep off Rins, but I’m very sorry because I didn’t make the podium, then I would have been even happier.”

Rossi sits seventh in the championship standings ahead of Valencia’s finale on 17 November in Spain.