One of the most highly-anticipated Superbike releases in recent years, the 2020 Honda CBR1000RR-R SP was finally unveiled this week at EICMA in Milan. In this edition of Countdown, we highlight six key upgrades on the premier class contender. 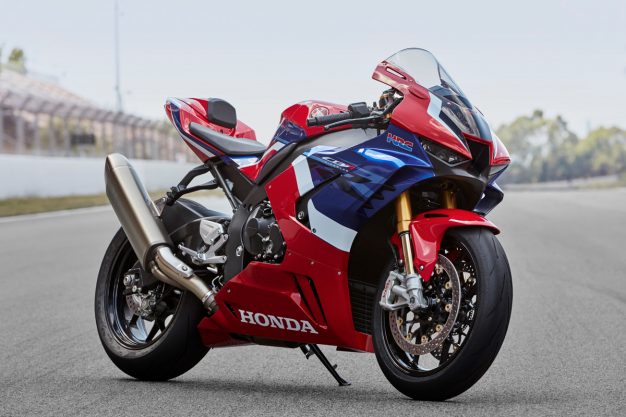 6. All-new bodywork:
One of the first things that will grab your attention on the CBR1000RR-R SP is the striking bodywork, which is all-new for 2020. The aggressive new fairing design is more than a styling exercise, and in fact creates a class-leading drag coefficient and restricts lift under acceleration while improving braking stability. Notably, the bike employs winglet structures that effectively generate the same downforce as the 2018 RC213V MotoGP machine. The results are a reduction in wheelies under acceleration and increased stability on braking and corner entry.

5. Akrapovic-developed muffler:
Akrapovic partnered with Honda in development of the motorcycle’s muffler. Constructed from titanium, its small physical size and lightweight construction contribute to mass centralisation and right-side lean angle. The exhaust valve was also designed with Akrapovic to deliver both low-rpm torque and high-rpm power – a valve stopper stops exhaust-gas leak when closed while also reducing noise, allowing total end-can internal volume to reduce by 38 percent compared to the outgoing design.

4. Improved electronics:
The 2020 Honda CBR1000RR-R SP boasts an extensive electronics system that has been improved over its predecessor. Throttle By Wire has been enhanced for great feel, while there are three default riding modes featuring options to change Power, Engine Brake, Wheelie Control and the optimised Honda Selectable Torque Control (HSTC). The electronics package also now includes adjustable Start Mode. It limits engine rpm at 6000, 7000, 8000 and 9000rpm set-points, even with a wide-open throttle, letting the rider focus on clutch release alone. A quickshifter is also fitted as standard, with performance optimised for racetrack performance and reliability. 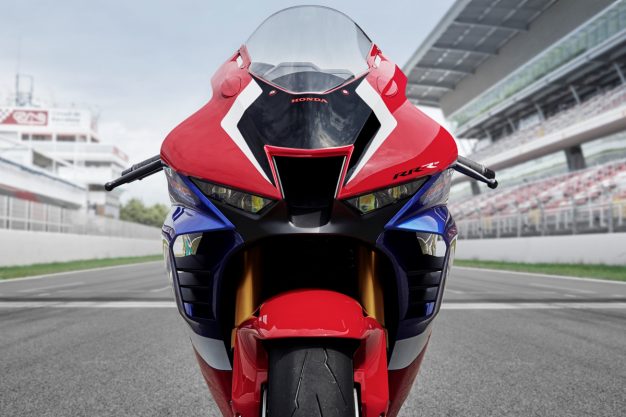 3. Upgraded chassis:
A totally new aluminium diamond frame uses the rear of the engine as the upper shock mount – the swingarm is longer and based on the RC213V-S design. The rigidity balance, weight distribution and steering geometry have been carefully adjusted for the increased engine output, in terms of front and rear grip levels, and feel for both. The SP is also equipped with Showa’s new Honda Electronic Steering Damper (HESD), while the 2020 model will come with Brembo brakes front and rear – the ABS system offers two modes: Sport and Track.

2. Ohlins suspension package:
One of the key differences between the standard model – which won’t be available in Australia – and the SP version is the suspension package. The SP will use the 43mm Ohlins NPX front fork that replaces the NIX fork of the previous model and second-generation Ohlins Object Based Tuning interface (OBTi) offers finer control of settings front and rear. The system allows both the fork and shock to be set independently from the default settings, and three individual modes can be set and stored allowing the rider to configure multiple settings for a track, and switch instantly while riding.

1. Updated engine:
The biggest upgrade of the ’20 Fireblade is the 1000cc inline four-cylinder engine. It’s completely new and designed with heavy input from the HRC MotoGP development program. Sharing the same bore and stroke as the RC213V-S, it delivers maximum power of 160kW at 14500rpm and peak torque of 113Nm at 12500rpm while tipping the scales at only 201kg. It’s a compact, short-stroke layout – sharing the bore and stroke of the RC213V – and features a semi-cam gear train, finger-follower rocker arms, titanium con-rods, RC213V-S internal friction reduction technologies, piston jets with check ball system and a built-in bottom bypass passage for the cylinder water jacket.