MotoGP debut at Valencia for Lecuona in place of Oliveira 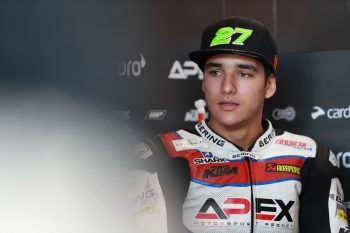 Iker Lecuona will make his MotoGP debut with Red Bull KTM Tech3 sooner than expected after being called into replace Miguel Oliveira at Valencia’s season-finale.

Lecuona signed with the Tech3 squad for his rookie premier class season in 2020, and will experience his first taste of the RC16 on 15-17 November for round 19.

Oliveira crashed heavily in high winds at the Australian Motorcycle Grand Prix, and recently underwent successful shoulder surgery that will keep him sidelined until February next year.

“To have this opportunity in my home grand prix is a proud moment for me,” said Lecuona. “We must enjoy this beautiful experience, but above all learn as much as possible for the future.

“All this would not have been possible without the help and encouragement of Herve Poncharal, as well as Eitan Butbul and the American Racing Team amazing crew, they helped me to grow as a rider and as a person. I also want to wish the best possible recovery to Oliveira, who will be my teammate next season. I will give my best in Valencia as I always do”.

Red Bull KTM Tech3 regular Hafizh Syahrin will race with the squad for the last time at Valencia.