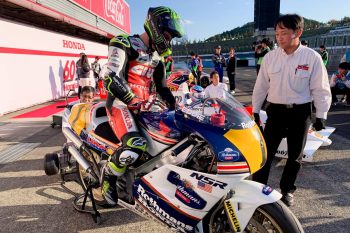 Cal Crutchlow has described piloting the Honda NSR500 ridden by Eddie Lawson in the 1989 500cc World Championship as spectacular.

The MotoGP contender was granted the rare opportunity at the Honda Racing Thanks Day in Japan last weekend, where he lapped Twin Ring Motegi aboard the iconic machine.

“It was incredible and a real privilege to ride an NSR,” said Crutchlow. “I grew up watching guys race these 500s – I used to think the bikes looked spectacular and now I know they are spectacular!

“The bike was fantastic but I can’t imagine racing one in 1989. I’d like to say a big thank you to HRC for this opportunity, because it has been a fantastic event for the fans, but also a special one for us riders.”

Crutchlow resumes his duties with LCR Honda this weekend at Valencia in Spain for the final round of the MotoGP World Championship.