Assisting Repsol Honda in team championship the target for Lorenzo

Spaniard hopeful of strong finish to the season at Valencia. 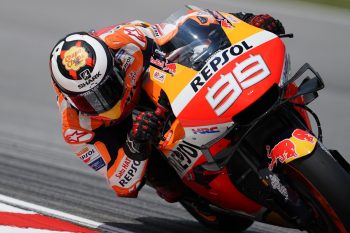 Jorge Lorenzo says assisting Repsol Honda in claiming the team championship is his target this weekend at Valencia’s MotoGP finale in Spain, the HRC squad currently ranked second in the standings.

The Spaniard has come off a string of challenging results over recent rounds, however he’s hoping to finish out the year strongly in his home country.

“Valencia is a circuit that is quite different to the ones we have been racing at,” Lorenzo explained. “It is very tight compared to the likes of Phillip Island and Sepang and it can sometimes be quite cool, especially in the morning and this is something we must pay attention to.

“After a more positive race in Malaysia, I am striving to continue making these gains and do everything I can to help the Repsol Honda team win the team championship.”

An injury-riddled season sees Lorenzo enter the final round 19th in the standings with 25 points to his name.