Italian ace fifth in the championship standings ahead of MotoGP finale. 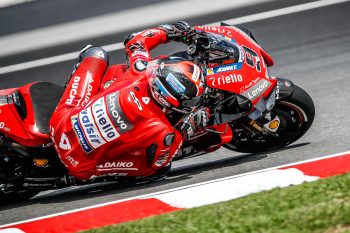 Danilo Petrucci has expressed the importance of finishing strongly this weekend at Valencia’s MotoGP World Championship finale, the Ducati Team rider admitting to a ‘complicated’ second half of the season.

Petrucci has endured a challenging campaign in the back half of 2019, with the Italian recently recovering from a heavy crash at the Australian Motorcycle Grand Prix last month.

“For me this race is very important, because after a rather complicated second half of the season I want to finish the year with a good result,” Petrucci explained. “I don’t think we are that far away, but we still have to resolve a few details to be more competitive in the race.

“Valencia is a circuit that I like, and in the last few days I’ve managed to recover well from the consequences of the crash in Australia, so I think we can do a good race.”

The number nine currently holds down fifth in the championship standings, with rookie Fabio Quartararo (Petronas Yamaha SRT) just four points behind him.