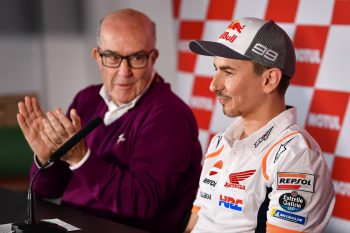 The Repsol Honda rider, who will make his 297th grand prix start on Sunday, exits the sport with a pair of 250cc championships and three premier class title earned in 2010, 2012 and 2015.

A number of injuries in 2019, such as fracturing multiple vertebrae at Assen, has prompted the Spaniard to call time on his career.

“I want to announce this will be my last race in MotoGP, and that at the end of this race I will retire from professional racing,” Lorenzo stated in a press conference. “I was three years old when everything started. Almost 30 years of complete dedication to this sport.

“Everyone who has worked with me knows how much of a perfectionist I am, how much hard work and intensity I put into this. Being like this requires a high level of motivation, when I signed for Honda I had an incredible feeling of motivation, achieving one of the dreams of every rider – to be an official HRC factory rider.

“Unfortunately, injuries came to play an important role in my season, being unable to ride in a normal way. I started to see some light but I had this bad crash in the Montmelo test, and some weeks later that ugly one in Assen. The truth is from that crash, the hill became too high for me, and even if I tried, I couldn’t find the motivation and patience to be able to keep climbing it.

“I’m disappointed with that, I want to say sorry to Alberto Puig, to Takeo, Kuwata, Nomura and all my team, who I have to say have always treated me in an exceptional way. I would like to sincerely thank everyone at Honda for their support and understanding and also extend my thanks and gratitude to everyone who has been there through my career.”

Honda is yet to announce who will take Lorenzo’s position in the factory squad for the 2020 MotoGP World Championship.