Miller on the podium while Marquez captures Valencia win 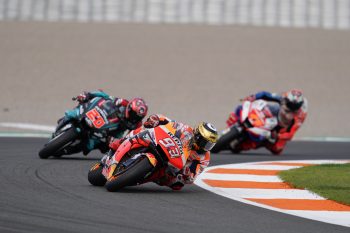 Marc Marquez claimed victory number 12 of the season at Valencia’s MotoGP finale, making Repsol Honda Team Champions to add to his rider title and the constructors’ championship – the triple crown.

Teammate Jorge Lorenzo also scored points in his final MotoGP rider, with the five-time world champion bidding an emotional farewell to the sport. Fabio Quartararo (Petronas Yamaha SRT), meanwhile, signed off with another impressive podium in second, and he pipped Jack Miller (Pramac Racing) to the title of top Independent Team rider as the Aussie followed him home in third.

Miller launched his Pramac Racing machine into the holeshot, with Marquez getting a sluggish getaway from the middle of the front row to drop down to P6, having run slightly wide at turn one. Polesitter Quartararo then grabbed the lead from Miller as the Australian ran wide at turn two, with the Frenchman quickly creating a small gap to his rivals.

Heading into turn one on lap two, Marquez was into P3 past the fast-starting duo of Alex Rins (Team Suzuki Ecstar) and Andrea Dovizioso (Ducati Team), however, and it wouldn’t take the 2019 Champion long to pick off Miller as he locked his radar onto Quartararo.

The Rookie of the Year’s lead was 0.7s over Marquez, with the latter racing to an eight-tenths advantage over Miller. Marquez was creeping up to the back of the leading M1 slowly but surely, and on Lap 8 a surprise, late but super fine move at turn 11 saw the number 93 lead.

Suddenly third place Miller – with Dovizioso and Rins in tow – had closed the gap to less than half a second, the top five covered by 1.7s. However, Marquez was in the groove and the eight-time Champion had pulled to over half a second clear of Quartararo, with the gap hovering between 0.6s and 0.8s for a number of laps after.

Miller wasn’t letting Quartararo have P2 all his own way either, that margin was remaining at a second – enough to keep the number 20 on his toes. Everyone held firm before a tenth here and a tenth there saw Marquez stretch his advantage to one and a half seconds with six laps remaining, with Miller cutting the gap to Quartararo down by four tenths.

It was 0.6s, but was there a late twist for P2 inbound? Not quite, Miller didn’t have enough speed to catch the back of the M1 by the time the chequered flag was waved, with Marquez taking another 25-point haul to land Repsol Honda team the 2019 triple crown, Quartararo taking another podium and beating Miller to top Independent Team rider.

Dovizioso and Ducati’s aims of picking up the Teams title didn’t materialise in Valencia, but P4 was a solid result for the Italian who was comfortably best of the rest in 2019. Rins capped off a fine season by claiming P5 at his home Grand Prix, however it wasn’t enough to grab P3 in the championship from sixth place finisher Maverick Vinales (Monster Energy Yamaha MotoGP) – the Malaysian GP winner having a quiet final round of the season before jumping onto the 2020 Yamaha on Tuesday.

Joan Mir (Team Suzuki Ecstar) in seventh was a great way to round off a very solid rookie MotoGP campaign, the Spaniard ending 2019 with five consecutive top 10s after an impressive comeback from his testing crash at Brno. Valentino Rossi’s (Monster Energy Yamaha MotoGP) P8 sees the nine-time world champion end the season P7 in the overall standings, with Aleix coming out on top in the battle of the Espargaro brothers – P9 for Aleix Espargaro (Aprilia Racing Team Gresini), P10 for Pol Espargaro (Red Bull KTM Factory Racing). That makes it all factories in the top 10.

On his final ever MotoGP ride, five-time world champion and future MotoGP Legend Jorge Lorenzo finished P13. It was an emotional day for the Spaniard who arrived back into pitlane to rapturous applause, with the Valencia fans paying their full respects to one of the sport’s greatest ever riders on his cool-down lap.

Brad Binder (Red Bull KTM Ajo) leaves the intermediate class on a high after taking his fifth win of the year, and third in a row. The South African played his cards to perfection to out-duel his main rival for second overall, Tom Luthi (Dynavolt Intact GP), with the Swiss rider forced to settle for second on the day and third in the standings.

A breakaway group of seven riders battled for victory after an initial red-flagged lightweight class race as wildcard Xavier Artigas claimed a phenomenal debut rostrum on board his Leopard Impala Junior Team machine.

After an incredible first season in the FIM Enel MotoE World Cup, we have our inaugural Cup winner: Matteo Ferrari (Trentino Gresini MotoE). After taking P5 in race two at the Circuit Ricardo Tormo, the Italian lifted the crown with an 11-point advantage over Bradley Smith (One Energy Racing), bringing an impressive season to a close with two wins out of six.

In the race on the day, Eric Granado (Avintia Esponsorama Racing) came out on top after a duel with the very same Smith, with Hector Garzo (Tech 3 E-Racing) completing the podium. 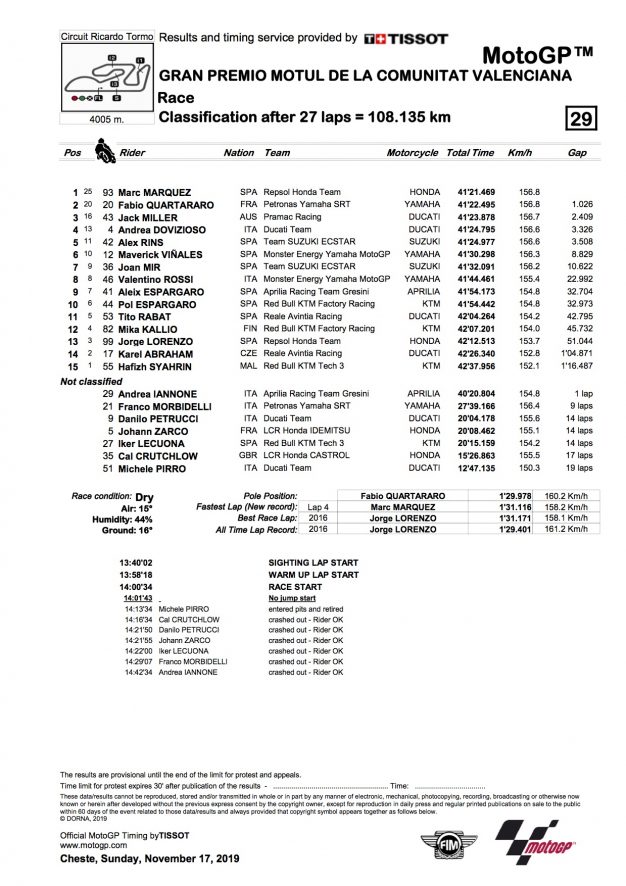 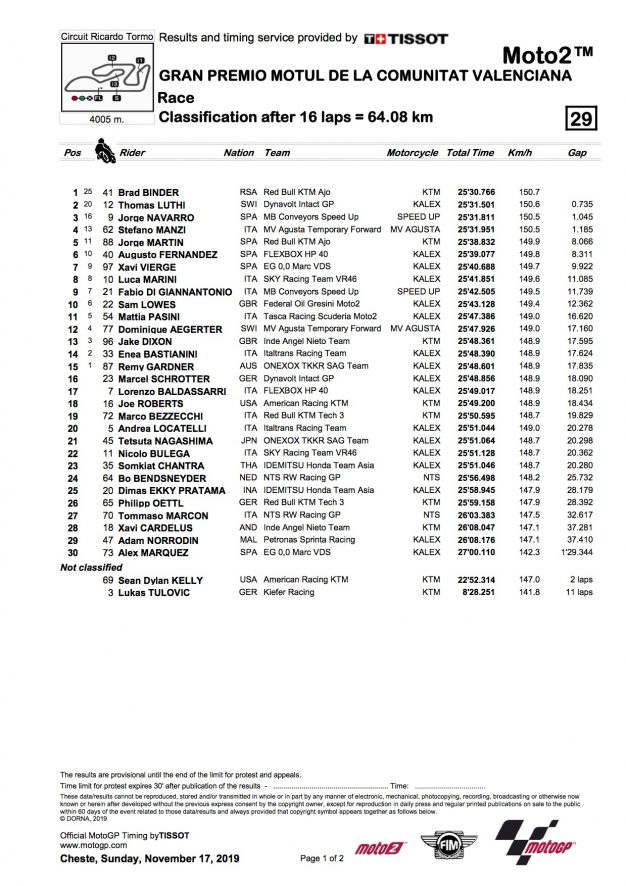 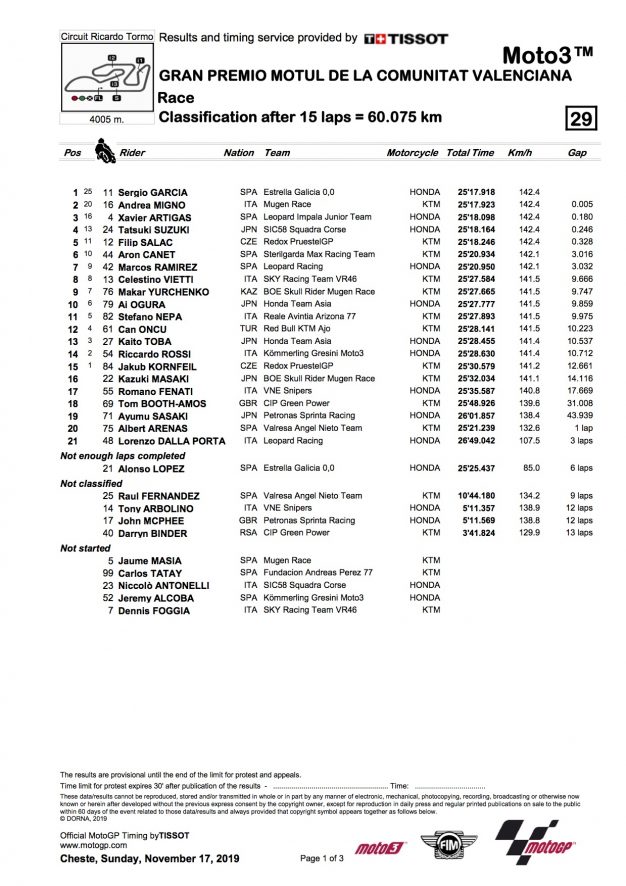 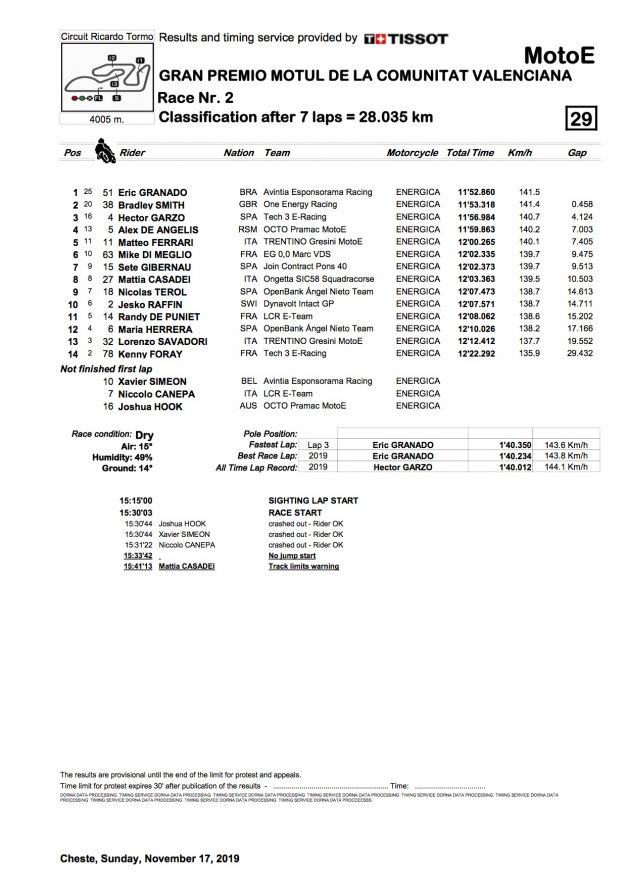 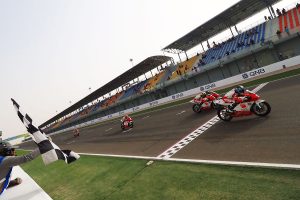 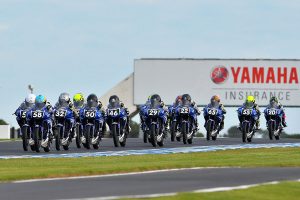