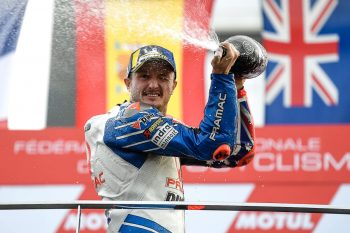 Australian Jack Miller has declared his podium result at Valencia’s MotoGP World Championship finale as his ‘best race to date’.

The Pramac Racing ace, who started on the front row in P3, charged to a thrilling third in the 27-lap encounter for his fifth appearance on the rostrum this year.

“I think I made up for last week in Malaysia when I faded to the back,” said Miller post-race. “I think this is my best race to date – [I was] consistent and stayed there. I was chasing Fabio, I had a few mistakes in the centre part of the race, and then I started coming back towards him.

“I felt like I got a second wind there for a bit as I had more grip on the tyres. It was an amazing race by both those two- flawless – all of us just out there hammering along. It was a long but fun race, they go quickly when you’re constantly chasing someone. It was awesome.”

It’s been an incredible 2019 season for Miller, earning his first podium in three years, making five for the year and six in his career following the final round in Spain yesterday.