Rookie of the Year completes campaign fifth in the standings. 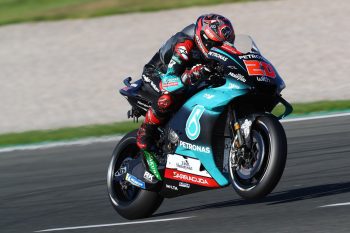 The award came down to the final race between Quartararo and Miller, although it was the Frenchman who emerged on top after a thrilling battle with Marc Marquez (Repsol Honda) in Spain on Sunday to finish second, one position ahead of Miller.

“I knew yesterday that Marc was going to be really strong, but if we couldn’t win then I would have been happy with second – and being the first Yamaha is a nice bonus too,” Quartararo explained. “We weren’t so far from the victory, so I can be very proud of the result.

“It’s an amazing end to the season. In 2018, a lot of people told me that I didn’t deserve a seat in MotoGP and that I wasn’t ready for it – but I think now with seven podiums and six pole positions I can show them they were wrong! I’m so happy with the entire year and it’s something the whole team should be proud of.”

Quartararo, who sealed Rookie of the Year in Japan, finished his maiden premier class season fifth in the championship standings.