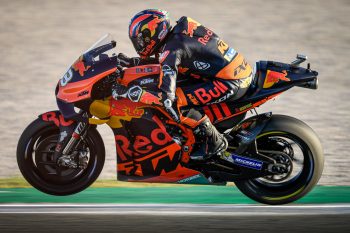 Red Bull KTM Factory Racing rookie Brad Brinder has described his first day on a MotoGP bike as ‘like another world’, the South African taking to Valencia for the first time aboard the RC16.

Binder, a former Moto3 world champion, lodged 70 laps during the opening day of off-season testing at the Spanish venue, winding up 21st on the timesheets.

“Today was incredible,” Binder stated. “From lap one, it was like another world. The MotoGP bike was insane – the amount of power, the wheelieing. I still don’t really understand what I’m doing, because it’s been a really difficult day trying to understand what’s going on.

“The feeling is incredible – it’s something I’ve never experienced before. Lap by lap – and didn’t matter if it was a fast or slow lap – I feel more and more comfortable on the bike. Things seem to be coming along easier.”

Testing resumes on Wednesday, where Binder will continue to acquaint himself with the premier class machine.