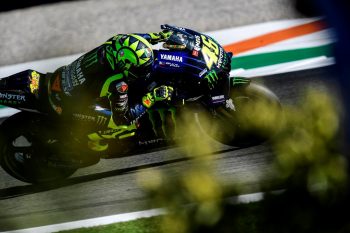 Valentino Rossi says his initial feeling with the 2020 Monster Energy Yamaha YZR-M1 prototype has been positive following the opening day of testing at Valencia.

Rossi, who welcomed his new crew chief David Munoz on Tuesday, was sampling a new chassis, engine and a different air intake while making comparisons to the 2019-spec bike.

“Today was not so bad,” said Rossi. “We continue to work on the prototype of the 2020 bike that is a bit different, and the feeling is positive.

“We also worked a bit on the tyres and the setting, and at the end we found something good. It became better and better towards the end of the day, and I had quite a good pace, so we will try to continue like this tomorrow.”

Rossi was ninth on the timesheets, as teammate Maverick Vinales was second. Petronas Yamaha SRT’s Fabio Quartararo set the pace with a selection of new components.