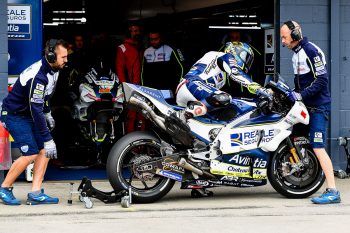 Karel Abraham has confirmed his departure from Reale Avintia Racing, ruling him out of the 2020 MotoGP World Championship while making way for a potential spot on the grid for Johann Zarco.

The Czech rider, who completed last week’s two-day test at Valencia, initially had a deal in place for next season, however reportedly had his contract terminated in the days following testing in Spain.

“You might know already, but I am not going to compete in MotoGP in 2020,” Abraham said in a statement. “I am very sad and disappointed, but need to move on and focus on what’s coming next.

“I would like to say a huge thank you to all my supporters, all my teams, fans, sponsors and especially my family that supported me through the good and bad times. It was a beautiful 15 years in the world championship, we had some great times and great memories will remain in my heart.”

Zarco is tipped as the favourite to join the squad for next season despite initially showing disinterest in the opportunity, however it’s understood additional support and reassurances from Ducati have swayed him.

The Frenchman cut his two-year deal short with Red Bull KTM Factory Racing in August and was later benched altogether in September, although he returned to the grid with LCR Honda for the final three rounds replacing Takaaki Nakagami.

An opening arose at Repsol Honda following Jorge Lorenzo’s retirement, but he was overlooked in favour of reigning Moto2 world champion Alex Marquez.