Factory Suzuki rider fourth fastest on day one of testing. 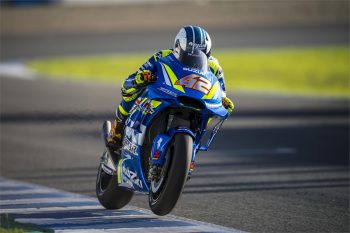 Team Suzuki Ecstar’s Alex Rins admits poor weather in the later stages of testing at Jerez hindered his progress, as rain prevented him from attempting a fast lap with the new Michelin tyre offering aboard the latest-spec GSX-RR.

The Spaniard was fourth fastest – one position behind teammate Joan Mir – as he continued to sample components in an effort to form his 2020 package.

“Today’s test session went quite well,” said Rins. “We tried the same things as in Valencia, like the 2020 engine spec, and we confirmed our initial findings.

“Tomorrow we’ll try a few more things regarding the set-up. We had some more plans for today, such as trying a fast lap with the new tyre, but unfortunately the rain arrived this afternoon and that hampered our progress.”

Suzuki test rider Sylvain Guintoli was also on deck alongside Rins and Mir, where he progressed in developing the new engine as well as a new swingarm.