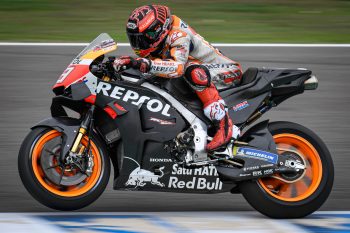 Marc Marquez (Repsol Honda Team) was fastest on day two of the Jerez test, the reigning champion posting a 1m37.820s on Tuesday morning to sign off for the season on top – although there were more headlines for the number 93 than just on-track.

From the test, Marquez will now head for surgery on his right shoulder after a crash on day one of the test exacerbated a problem that had already begun to plague him. Alex Rins (Team Suzuki Ecstar) was second quickest and just 0.017s in arrears, with his teammate Joan Mir completing the top three on Tuesday.

Day two at the Circuito de Jerez-Angel Nieto was largely disrupted by rain, with the riders getting limited dry track time before the wet weather arrived at around 12:15pm local time.

On a wet track, less than half the field ventured out, but those who did include MotoGP rookies Alex Marquez (Repsol Honda Team), Iker Lecuona (Red Bull KTM Tech 3) and Brad Binder (Red Bull KTM Factory Racing), as all three used the time to test out their new machines in the different conditions.

Before that, however, Marquez had swiftly got down to business, setting the second-fastest time of the test overall – and the quickest of the day – on his third flying lap.

The number 93 retained three bikes in the garage as on day one, and the partial dislocation of his right shoulder suffered on Monday didn’t seem to be affecting him out on track but Marquez then announced he has elected to have surgery as a preventative measure after medical consultation.

The operation will be similar to the one performed on his left shoulder at the end of 2018. Rookie Alex Marquez was 17th, and Cal Crutchlow (LCR Honda Castrol) 13th on Tuesday – although the Brit put in limited laps.

Limited laps was true for many and definitely for Mir, who did only 12 laps to end the day in third, with Alex Rins putting in twice that and turning the tables on his teammate on day two. Test rider Sylvain Guintoli did 14 laps for the Hamamatsu factory, but the Team Suzuki Ecstar camp seem very pleased with their early 2020 progress with the new engine.

Back-to-back testing with 2019 and 2020 parts was key for team manager Davide Brivio, and all three riders improved their lap time on Tuesday morning.

Yamaha ended Tuesday in fourth with Maverick Vinales (Monster Energy Yamaha MotoGP) – although the number 12 remains fastest overall – and he put in 15 laps. Across the two days, Yamaha duo Vinales and Valentino Rossi continued testing the 2020 YZR-M1, with both having one 2020 – with a slightly different fuel tank – and one 2019 M1 in their garage.

On day one, Rossi did a lot of his running with a carbon swingarm. However, that wasn’t the case on day two, with the number 46 running an aluminium swingarm on both of his bikes.

Vinales seemed content using the aluminium swingarm for most of the test, with both riders saying small steps have been made with the 2020 engine. Rossi ended Tuesday in 10th, half a second off the top after 33 laps – more laps than most.

Over at Petronas Yamaha SRT, Fabio Quartararo was fifth on Tuesday and teammate Franco Morbidelli seventh. They confirmed they had been trying a 2020 prototype Yamaha engine specification in Jerez. The carbon swingarm didn’t appear on day two for the duo, but it was a solid looking test for Quartararo and Morbidelli heading into the winter break.

Sixth fastest Andrea Dovizioso (Ducati Team) and 12th fastest Danilo Petrucci (Ducati Team) continued to work on Ducati’s new chassis on both days in Jerez, with both riders confirming it’s a step in the right direction. On day two, test rider Michele Pirro was seen using a new aero piece on the front wheel too.

Jack Miller and Pramac Racing, meanwhile, completed just four laps on day two as the rain saw them pack up early for the winter, but the Australian finished P8 on the day and combined standings after improving his time on Tuesday, the last rider within a second of Vinales’ overall best.

At Red Bull KTM Factory Racing, MotoGP Legend and test rider Dani Pedrosa was back out on track after missing day one through illness and he did 11 laps. Pol Espargaro, fastest KTM in ninth, continued to lap with a new RC16 with the orange chassis.

There was also a new fairing and new aero setup on display across the two days as Espargaro seems pleased with the Austrian factory’s progress. Binder was lapping on the ‘old’ bike and did a good amount of laps before the rain came on Tuesday morning, and as aforementioned the South African also headed out in the wet. Lecuona was also still on the ‘old’ bike as both rookies’ aim was to get more comfortable on the MotoGP machine. Lecuona and Binder ended the test 20th and 22nd respectively on Tuesday.

Aprilia Racing Team Gresini and Aleix Espargaro had a new front wheel cover on day two in Andalucia, an all-in-one piece with the front mudguard, wheel cover and calliper duct. He was 15th after 24 laps. Andrea Iannone, on the other side of the garage, only did four laps on Day 2 but finished eleventh. Test rider Bradley Smith, 21st on Tuesday, completed the most laps of anyone on day two with 43. 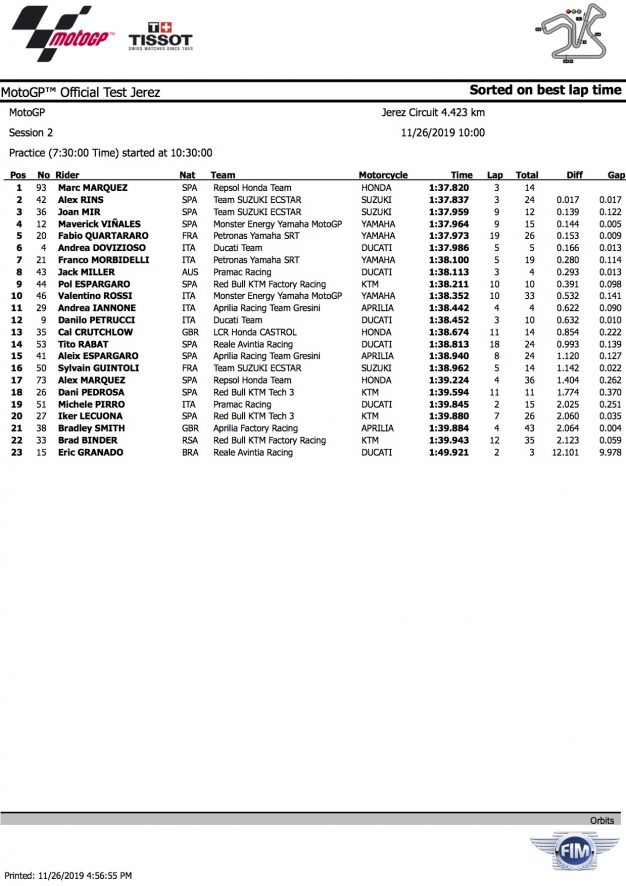