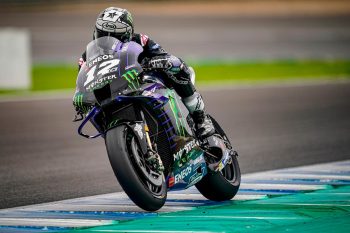 Maverick Vinales says Yamaha is still working on improving its top speed after continuing to test the 2020 prototype YZR-M1 that’s equipped with a new engine at Jerez this week.

The Spaniard left the test motivated after making positive gains with the updated machine, although he’s adamant on enhancing the bike’s weak areas ahead of the Sepang test in February 2020.

“Actually, I felt really good on the bike, riding in a really good way,” Vinales explained. “Yesterday, I felt fantastic on all the laps and that is the most important.

“I end the 2019 season with a great feeling and a lot of motivation, and that keeps you going when preparing for the new season. Yamaha is working really hard, but we‘re still working on top speed. For sure in other areas we‘re quite strong, but we need to stay focused on improving our weaker areas for the next test in Sepang.”

The Monster Energy Yamaha rider topped day one of testing at Jerez before finishing day two in fourth after completing minimal laps.