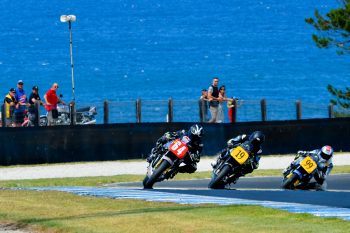 Team Australia has been selected for the International Challenge at the 2020 International Island Classic, which is due to take place on 24-26 January.

“Winning the 2019 International Challenge is something I’m so proud of, and to continue racing against some of the biggest names in history at the event sparks my passion,” said Martin.

“The best part is it’s a different rider and bike combo that seems to come to the fore each year, so everyone’s a threat. I’m really starting to get the goosebumps as we close in on 2020 because every year it gets just that bit tougher.

“And I just love the event where people can get up nice and close to the bikes and are free to wander through the pits.”

Johnson was the dominant force in 2018 and arrives at Phillip Island off the back of victory in the Superbike Classic TT in August at the Isle of Man, and podiums in the Macau GP last week with Josh Brookes and a Superstock TT podium at the Isle of Man TT in June.

Metcher is also well-qualified at Phillip Island, winning the International Challenge crown in 2016, and Giles took the Ken Wootton award in 2013 and 2014.

Phillis, Beaton, Donald, Ditchburn, Webster and Allen are also long-time Aussie Island Classic campaigners and have contributed greatly to the local team’s success in the 15 years of the championship. Australia has claimed the title 12 times and the UK has landed the crown three times. Line-ups from America and the United Kingdom will be unveiled in the coming week.