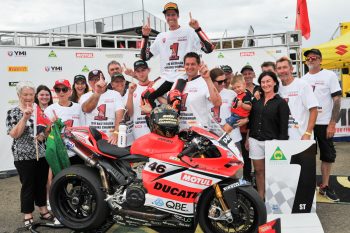 It’s been confirmed Mike Jones will defend his Australian Superbike Championship (ASBK) with DesmoSport Ducati after officially re-signing with the squad for 2020.

After clinching a thrilling second premier class title at Sydney Motorsport Park last month, both Jones and DesmoSport Ducati indicated they would continue their partnership for another season, however the two-time champion has now formally inked a contract extension for next year aboard the Panigale V4 R.

The Queenslander experienced his first taste of the all-new machine at Morgan Park in November, drawing a positive first impression.

“I love riding the Ducati for Ben [Henry] and Troy [Bayliss], and we have a really strong team,” Jones explained. “All of us agreed that it made sense for me to stay here, to ride the V4 R, and defend our title. And by doing that, [it] will only support my long-term goals of racing in the world championship.

“I’ve been out and ridden the V4 R that Troy’s been developing with Ben, and I’m pretty excited to race it, to be honest. It’s not quite like anything I’ve ridden before, with the rpm, power delivery and of course, the wings.”

Team co-owner and three-time Superbike world champion Troy Bayliss added: “I’m really happy to come to an agreement with Mike for 2020. I know he has aspirations to race in the world championship, and to be honest, I think he’s capable of great results if the right package is around him.

“So to retain him just goes to show how strong our championship here is becoming, and how good the DesmoSport Ducati team as a package has become. I’m really proud of what DesmoSport has achieved in such a short time, with a tight-knit crew, and I can’t wait to see Mike at full throttle on the V4 R.”