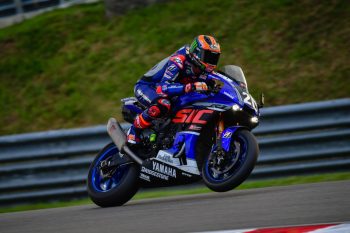 WorldSBK regular Michael van der Mark admits he was surprised by Yamaha Sepang Racing finishing inside the top 10 at the weekend’s 8 Hours of Sepang after he was taken out by Mike di Meglio (F.C.C. TSR Honda France).

The event, which marked round two of the 2019/2020 FIM Endurance World Championship (EWC), was reduced to under six hours after being heavily affected by rain.

Van der Mark was able to recover from the incident and returned to the track following a pit stop, where he later handed the reigns to MotoGP contender Franco Morbidelli to the bring the squad home in seventh.

“It was a weird 8 Hours of Sepang, but when we did finally get to race the conditions were good,” said van der Mark. “I had a good feeling with the bike and a strong pace from the start, so when I got passed for the lead I decided to sit in behind and follow rather than take any risks.

“My plan was to retake the lead when we hit traffic. I’m not sure what Di Meglio’s plan was with the pass at the final corner, but it didn’t work, and it ended for me with a massive highside that let me badly winded. The team did an amazing job to get the bike back on track and I was quick to rediscover my rhythm so, apart from the position, I enjoyed the race.

“When Franco took over the bike for the last stint, we could see he had really good pace, but we were still surprised to finish as high as seventh. Massive thanks to the team, who worked so hard for us this weekend, and also to Franco and Hafizh, who I really enjoyed racing with.”