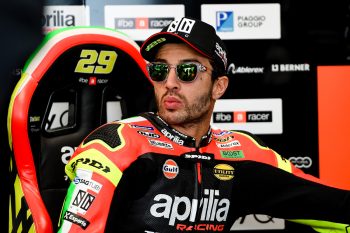 The FIM has revealed MotoGP World Championship contender Andrea Iannone has been provisionally suspended after allegedly returning a positive sample for a banned substance under the World Anti-Doping Code.

The Aprilia Racing rider is understood to have returned an adverse analytical finding of a non-specified substance under Section 1.1.a) Exogenous Anabolic Androgenic Steroids (AAS) of the 2019 Prohibited List.

The reading was collected in a urine sample from him at an in-competition test carried out by the FIM at the penultimate round of MotoGP in Sepang, Malaysia, at the beginning of November.

Iannone has the right to request and attend the analysis of his B sample, while his provisional suspension comes into immediate effect from 17 December 2019.

He is banned from participating in any motorcycling competition or activity until further notice. Under Article 7.9.3.2 of the World Anti-Doping Code, the premier class race winner may request lifting of his provisional suspension. Iannone has since made a statement on social media, indicating he’ll request and attend the analysis of his B sample.