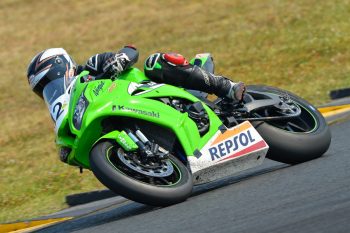 Australian Superbike Championship (ASBK) privateer of the year Matt Walters will continue to be supported by Kawasaki Motors Australia in 2020 for an 11th season.

Walters experienced a strong 2019 campaign aboard the ZX-10RR, earning a front-row start at Phillip Island’s penultimate round which he later converted into a season-best fifth overall placing.

“[I’m] super happy to back with Kawasaki Motors Australia for my 11th year with the Japanese manufacturer,” said Walters. “Together we have won championships, and this year [we went] back-to-back Australian Superbike privateer [of the year].

“The small family-run team and I will be setting our sights straight for the podium and really looking forward to 2020 on my Kawasaki ZX-10RR at the season starter at Phillip island.”

Kawasaki Motors Australia national sales and marketing manager Robert Walker added: “2019 was a very strong year for Matt, taking out the ASBK ironman award and we were very happy with his result for the year.

“Each year Matt and the team have represented Kawasaki very well and improved on their results. We are eager to see how his 2020 season progresses on the Ninja ZX-10RR.”